The young people of the new European Solidarity Corps are active in Norcia, Italy, recovering what was destroyed by the earthquake 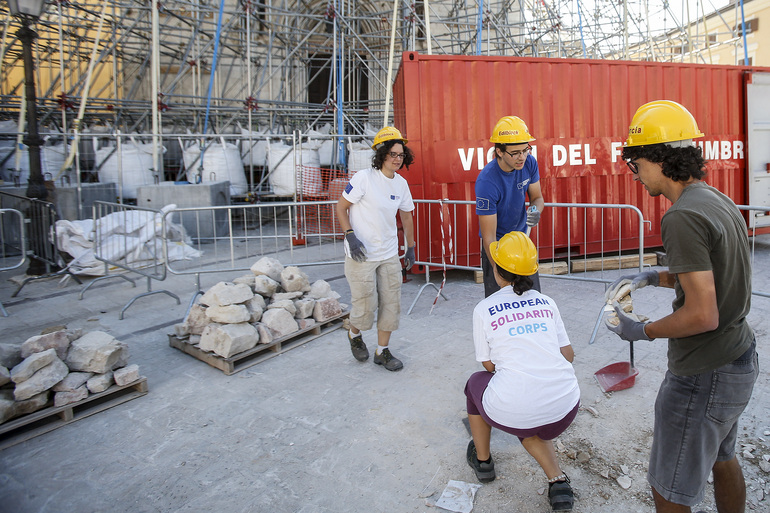 • 'St. Chiodo deposit', where more than 4,500 cultural, librarian and historical assets from 82 different sites and buildings affected by the earthquake of 2016 in central Italy are stored and restored.

• Tibor Navracsics -European Commissioner for Education, Culture, Youth and Sport- and Beatrice Covassi, visit Norcia and participate in the meeting "Building a better Europe for the next generations with citizens"

The first group of European Solidarity Corps volunteers these days in Norcia, Italy, to repair the damages and rebuild social services for the local community affected by the serious earthquakes that affected the region a year ago. The 16 young people from the project "European Youth for Norcia", led by the Italian organization "Kora" help to rebuild historic buildings seriously damaged by earthquakes, such as the Basilica of San Benedetto and the Benedictine Monastery. They also work with young people and the elderly of Norcia, organizing workshops, outdoor activities and cultural events.

Seven months after European Commission President, Jean Claude Juncker, announced his idea of ​​creating a European Solidarity Corps, the initiative is underway. "European citizenship has suffered a lot and I´m proud of the young Europeans who are showing solidarity in helping this community to recover. Their efforts, especially to rebuild the historic Basilica of St. Benedict, these young people are also building a bridge between the past of Europe and its future, an important contribution to the next European Year of Cultural Heritage " said president Juncker.

Since its launch on 7 December 2016, more than 34,000 young people have joined the European Solidarity Corps. In March 2017, they began to coincide with organizations; Since then, some 15,000 participants have been contacted and 700 placements have been accepted. The aim is for 100,000 young people to take part in the European Solidarity Corps by the end of 2020.

On 30 May 2017, the Commission presented a proposal to put the European Solidarity Body on a firm footing, with a budget of € 341.5 million for the years 2018-2020 and a specific legal basis. In addition, the Commission proposed to expand opportunities for young people. In addition to volunteering, internships and placements, the European Solidarity Corps will also offer participants the opportunity to set up their own solidarity projects or to volunteer as a group. The proposal for a draft Regulation should be approved by the European Parliament and the Council before it enters into force.

Young people from Basque Country (Euskadi) who are no more than thirty years old can also participate in the activities of the European Solidarity Corps which provides for diets and budgets for future activities.