Minister Artolazabal emphasizes the role of inclusive rugby "in the construction of the great social pillar, the basis of an advanced society" 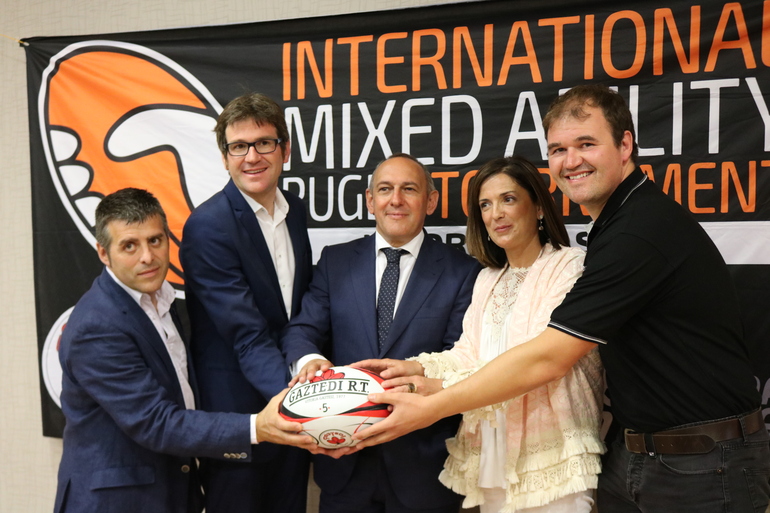 • II Edition of the Mixed Ability Rugby World Tournament, in Vitoria-Gasteiz from 21 to 25 August, with 16 teams

• 1,000 participants among athletes, companions and attendees to the conference.

The Basque Government's Minister for Employment and Social Policy, Beatriz Artolazabal, highlighted this morning "the role of inclusive rugby in the construction of the great social pillar, the basis of an advanced society." Together with Moisés San Mateos, President of Gaztedi Rugby Taldea, Mayor Gorka Urtaran and Deputy General Ramiro González, Artolazabal presented this morning the International Rugby Tournament Inclusive-IMART'2017, to be held from August 21 to 25 in Vitoria -Gasteiz.

"In August, Vitoria-Gasteiz will receive 1,000 people. There are 15 teams from England, Wales, Scotland, Italy, Ireland, Basque Counry, Argentina, France and Spain, as well as the international combination "Imart" which brings together Hong Kong, the United States, Colombia, Serbia, Mexico and Canada. This international presence represents a cultural richness for Euskadi and for its capital, which, over a week, will see through its streets and its surroundings many new faces that then, when they return to their homes, will divulge the benefits of this land " the Minister Artolazabal commented.