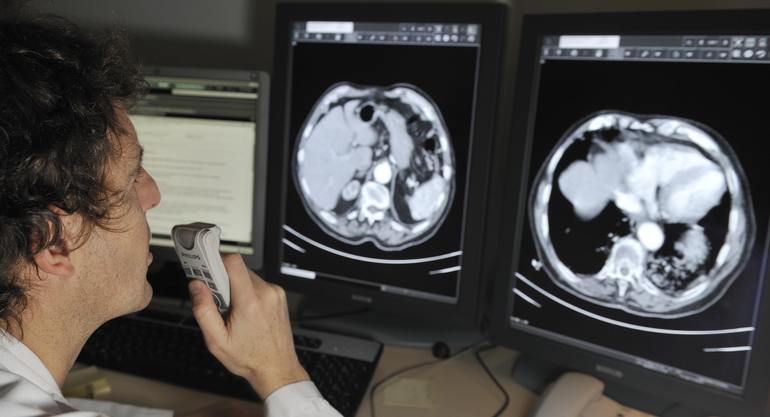 2011 will be a milestone in the process to modernise the Basque public health system. In addition to care for chronic patients being provided by the telecare system, digitising radiography imaging (the traditional x-rays) will mean two significant advances by the end of next year: first of all, any radiography imaging will be able to be consulted from any centre in the Osakidetza network, and secondly, the patient will be given a personal password to access those images and other details of his medical records, online from his own home. The Basque Government's Health Minister, Rafael Bengoa, took part in a pilot test of this new digital system at Txagorritxu Hospital (Vitoria-Gasteiz) and stressed that these measures will place Osakidetza "in the First Division" of heath systems. "The Osakidetza digital system is the most cutting-edge in Spain and will be implemented in all its health centres by next year," he added.

The traditional x-rays that the patients take home after a radiography test will become history next year. The modernisation process implemented in Osakidetza will ensure that all the radiography imaging performed at the public health centres of the Basque Country will be digital by the end of next year. This advance, the first of its kind in Spain, means significant improvements for the patient, as the exposure time during these tests will be reduced, there will be less need to repeat the tests, the quality and accuracy of the diagnostics will be increased and, above all, the traditional x-rays will no longer have to be sent from one centre or another. By the end of 2011, any radiography imaging performed in the public network will be able to be consulted from any Osakidetza centre. The Basque Health Minister, Rafael Bengoa, stressed the importance of this type of progress that "puts technological advances at the service of society and health". "The Osakidetza digital system is very advanced, it is the most cutting-edge in Spain and its coverage will reach 100% next year," he pointed out.

Txagorritxu Hospital (Vitora-Gasteiz) conducted a pilot test this morning, when the Basque Health Minister, Rafael Bengoa, took part by having an x-ray taken and was then shown how the new system will operate.

The Minister was the first to test out the digital imaging system at Txagorritxu Hospital and to take home a CD with the images that would have previously been handed over as traditional x-rays. By the end of next year, this process will have been extended to the whole Osakidetza network. It will also go even further as not only will a health centre be able to access the radiology tests performed by the other health centres, but the patients will not to have to take a CD away with them, but rather will be given a password to access their medical records where those images are stored online. Thus by the end of next year, the patients will have a personal password to let them access those images online.

"The Osakidetza digital system is very advanced, it is the most cutting-edge in Spain and its coverage will reach 100% next year," Bengoa pointed out and he went on to stress that Osakidetza is "in the First Division" of public health. This digital system is part of the process to comprehensively modernise the Basque Health System, whose priority objective is to provide chronic patients with telecare. This will mean that many patients will not have be admitted to hospital and they may be cared for or apply self-care in their own homes thanks to technological advances such as this one.

Bengoa explained that the digital system meant significant improvements for the patient, the health care staff and also for the environment, as the liquids to develop the traditional x-rays will no longer be needed and this will help to improve the sustainability of the system and further consolidate the idea of a "greener health system".

Thus, the patient will see how the exploration time and the number of repetitions of the test decreases. Unnecessary tests will also be avoided, the quality and effectiveness of the diagnosis improved and access to that information facilitated. In the case of the medical staff, it will make it easier for them to access the information from any point of the health network, avoid unnecessary tests and wasted material, and will improve the monitoring and control of the diagnosis.

This digitalisation process involved an investment of 18 million euros.
In the Basque Country, an average of 3.3 million x-rays are taken per year at a cost of over 3 million euros.