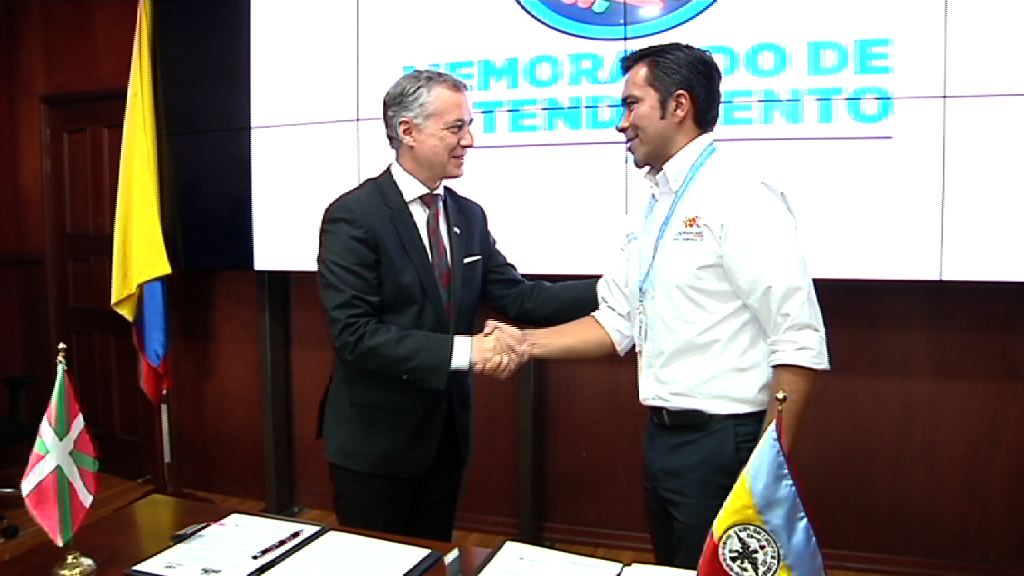 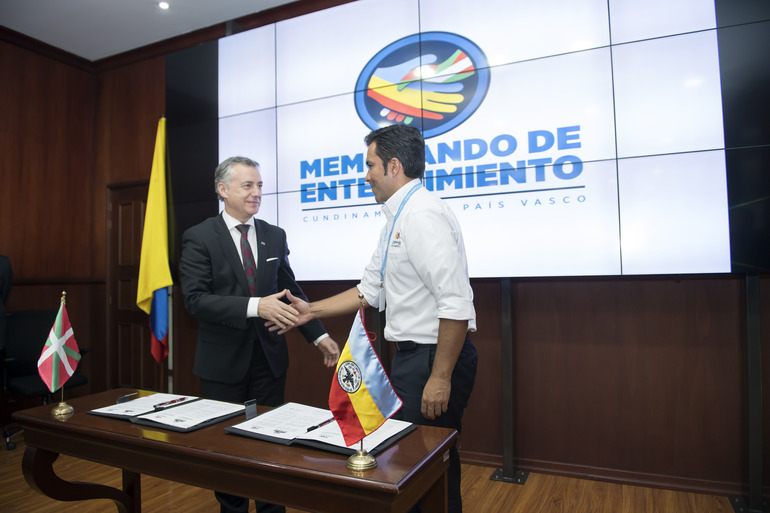 The Basque Government and Cundinamarca Department have signed a Memorandum of Understanding in order to consolidate and further bilateral relations and undertake joint cooperation projects in areas of mutual interest. The agreement was signed between Lehendakari Iñigo Urkullu, the Basque Premier, and the Governor of this department, Jorge Emilio Rey, as part of the current institutional trip of a Basque Government  delegation to Colombia. It should be noted that the Basque Government has identified Colombia as a "priority" for the internationalisation of the Basque Country as part of the Basque Country Internationalisation Framework Strategy 2020. As the Lehendakari recalled, Colombia is now the South American country with the largest presence of Basque Country.

As Urkullu explained during his first day in Colombia, the Basque Country is developing a strategic partnership network with leading regions with shared interests. Cundinamarca is the sixth partner to join that network. The existing members are Aquitaine, Bavaria and Flanders in Europe, Jiantsu in China and Querétaro in Mexico. Furthermore, Quebec joining soon is also in the pipeline. Specifically, the memorandum signed today with Cundinamarca Department envisages joint actions in cluster policy, trade, investments and business, shared value models, smart specialisation, shared models to improvement competitiveness, productivity and marketing of processed food and products, internationalisation of companies, R&D&i, the environment, territorial planning, culture, education and tourism.

Cundinamarca is one of the 32 departments of Colombia, whose capital is Bogota. The region has over 10 million inhabitants and is home to a third of the country's companies. In fact, the region is driving the country's growth, as it accounts for 30% of Colombia's GDP. It enjoys great international recognition, as it is an attractive region to do business and for investment.

Cundinamarca is also one of Colombia's departments that have generated most economic interest and where most Basque companies have chosen to set up recently, with 85% located in Bogota. Its strategic location in the centre of Colombia and its communications network make it a highly attractive region for the Basque Country and an ideal partner to develop relations.

MEETING WITH COMPANIES AND COMMUNITIES

After the signing of the agreement, the Lehendakari and the Minister for Economic Development and Infrastructures, Arantxa Tapia, held a working meeting with Basque companies.  Apart from the meeting being an opportunity to learn firsthand about the needs and difficulties facing the companies, the Basque Government stressed its commitment to help the business fabric in the opening-up of trade and internationalisation processes. Among other measures, Urkullu stressed the support to 1,200 Basque small and medium-sized enterprises in their accessing foreign markets.

The Basque Government delegation ended the day by meeting representatives of the Basque community in Colombia, which was a chance to delve further into the historical roots between the Basque Country and Colombia, as the host country. Incidentally, it should be noted that 40% of the inhabitants of Antioquia, nearly 2.8 million people, have Basque roots and it is one of the places with the highest concentration of Basque descendents in the world. The country also has three euskal etxeak (Bogota, Medellín and Caldas).