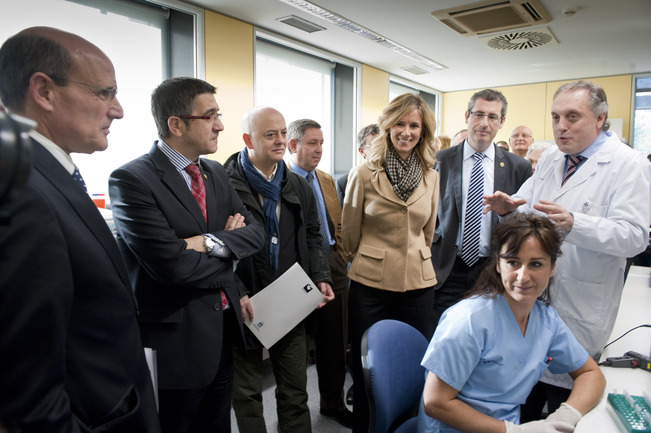 The Lehendakari and the Minister for Science and Innovation, Cristina Garmendia, have inaugurated the Basque Country's first Healthcare Research Institute.

The Lehendakari has stated that he is convinced of the importance of turning also to health, science, research and innovation for "growth, job generation and social inclusion."

The Lehendakari, Patxi López, has inaugurated Biodonostia, the Basque Country's first Healthcare Research Institute, which hopes to become a "reference point at national and international level." This project will strengthen, in a preferential manner, "translational" research, the Lehendakari stated, that is, "research that moves from the laboratory to the bedside for the fastest transfer of scientific knowledge to clinical practice," enabling "more efficient" care for patients.

The Lehendakari has stressed the support of all institutions for the Basque Country's first biomedical research centre, stating that this shows the relevance of this project and the capacity for agreement in the strategic projects of the region.

The inaugural act also included the participation of the Minister for Heath, Rafael Bengoa, the Minister for Science and Innovation, the Deputy General for Gipuzkoa, Markel Olano, and the Mayor of San Sebastian, Odón Elorza. The Lehendakari, Patxi López, has defined research as both knowledge and wealth, given that 270 professionals are involved in Biodonostia. In this sense, the Lehendakari has affirmed that the Basque Government is attempting to turn to science, research and innovation for "growth, job generation and social inclusion within healthcare as well."According to the data provided, investment in R&D within the Basque public healthcare system in 2009 amounted to 40 million euros, "a historical figure" representing 22% more than investment made last year.