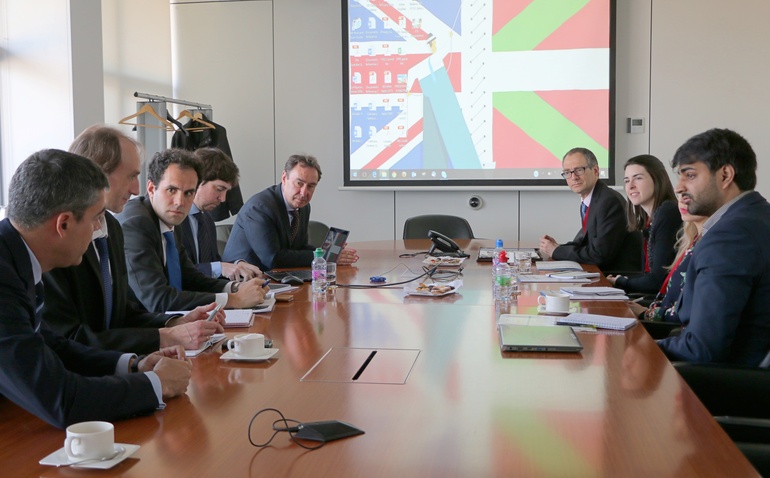 A British Government delegation is visiting the Basque Country today and tomorrow to get first-hand knowledge of the rail infrastructures and projects of the Basque Government. The UK group is particularly interested in the development of the Basque Y high-speed rail network and its integration in the urban landscape, as they are immersed in constructing a similar high-speed network, the HS2, that will run from London to Birmingham.

The tight schedule for the two-day includes meetings between the British delegation, made up of technicians from the High Speed Two (HS2) publicly-owned company and representatives of the British Government's Department for Transport, and the Basque delegation, made up of senior officials of the Basque Government, technicians and the general managers of Euskal Trenbide Sarea (ETS) and Euskotren.

The matters discussed include the manage model management used by the Basque Government, by means of ETS [Basque Railway Network), to constructing the section of the Basque Y through Gipuzkoa, as the result of the mandate agreed with the Spanish government.

The role was also analysed that the Basque Government wishes to play as a Transport Authority, in this case by means of Euskotren, to operate the intercity passenger and  the cross-border regional services and to be involved in managing the goods traffic through logistic platforms.

Apart from the meetings with representatives from other institutions such as the Bizkaia Transport Consortium or Bilbao City Council, the delegation will visit different rail infrastructures such as the tramway of the capital of Bizkaia, a Metro de Bilbao underground station, the Herrera and Loiola termianls, the Urnieta-Hernani section of the Basque Y through GIpuzkoa, and the CAF factory in Beasain.

New office of the Basque Country in London

The visit of the British delegation is taking three weeks after the Basque Government's Ministry for Economic Development and Infrastructures opened an office in London to reinforce the presence of Basque companies in the United Kingdom.

It so happened that this opening coincides with a moment of uncertainty due to the arrival of Brexit and the Basque Government is particularly attentive to the opportunities that could emerge. Therefore, and given the importance of today's visit, the manager of the London Commercial Office, Pablo Fano, was also at the meeting.

The UK is one of the top four destinations of Basque exports. Over fifty Basque companies are currently doing business in the United Kingdom in such diverse sectors as the automotive industry, energy, aerospace, engineering services, financial services and the railway industry.

The Basque Country has leading companies in different market niches of the railway market such as Sener, as it is already working with HS2, CAF and Danobat, all of which boost a strong innovation component.

In fact, SENER is part of the EDP (Engineering Delivery Partner) consortium tasked with the design, construction and commissioning of the new London-Birmingham high speed line, with will be 230 km long.

This consortium is in charge of helping to prepare the contracting of the main civil works packages, along with the railways stations and systems, as well as supervising, coordinating and managing the design, construction and commissioning engineering.

The CH2M/Atkins/SENER team is fully integrated in HS2 Ltd to drive long-term efficiencies in the design and construction process.

The construction and commissioning of the project is expected to occur in phases between 2017 and the end of 2026, even though some preliminary work began in 2016.

The background to this visit dates back to the end of last year, when a working party was set up between ETS and Euskotren, on the one hand, and the British HS2, on the other hand. As part of this forum, a delegation of both companies visited the High Speed Two installations in London and proposed setting up panels in different areas of interest such as coordination and political agreement, legislative development and planning, and railway design and technical operating.