Beatriz Artolazabal: "the social redefinition proposed by the European Commission with the Pillar of Social Rights unites the Union" 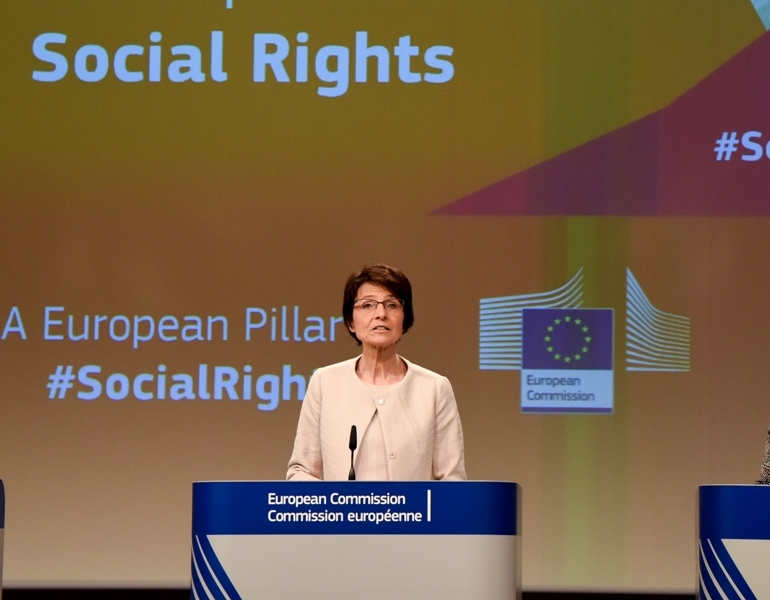 The Basque Government Minister of Employment and Social Policies, Beatriz Artolazabal considers that the “social redefinition proposed by the European Commission with the Pillar of Social Rights unites the Union and its countries and regions”. This morning, in Brussels, the European Commission presented the foundations of the so-called “European Pillar of Social Rights which sets out 20 key principles to support fair and well-functioning labour markets and welfare systems. The Pillar is conceived as a compass for the renewed process of convergence towards better working and living conditions in Europe, primarily for the ‘euro area’ but also for al EU Member States wishing to be part of it.”

Artolazabal emphasized the “accent placed by the European Pillar of Social Rights on aspects like, for example, the work-life balance of parents and carers; information for workers, access to social welfare and working hours”.

Jean-Claude Juncker, President of the European Commission, said “I have been seeking to put social priorities at the heart of Europe's work, where they belong. With the European Pillar of Social Rights and the first set of initiatives that accompany it,we are delivering on our promises and we are opening a new chapter. We want to write this chapter together: Member States, EU institutions, the social partners and civil society all have to take on their responsibility. I would like to see the Pillar endorsed at the highest political level before the end of this year.”

The European Pillar of Social Rights was prepared by the Commission, under the leadership of Vice-President Dombrovskis and Commissioner Thyssen, in close consultation with stakeholders at all levels. It reaffirms rights that are already present in the EU and international legal acquis and complements them to take account of new realities. The principles and rights enshrined in the Pillar are structured around three categories: equal opportunities and access to the labour market, fair working conditions and social protection and inclusion. They place the focus on how to tackle new developments in the world of work and society at large so as to deliver on the promise of the Treaties of a highly competitive social market economy, aiming at full employment and social progress.

As the Commission explained "The European institutions will help to set the framework and lead the way forward for the implementation of the Pillar, in full respect of Member States' competences and social dialogue traditions. A number of principles and rights included in the Pillar will require further legislative initiatives to become effective. Where needed, existing EU law will be updated, complemented and better enforced."

The European Commission adds a number of further concrete legislative and non-legislative initiatives such as on the work-life balance of parents and carers, on the information of workers, and on access to social protection and on working time.

A social scoreboard is also established to track trends and performances across EU countries in 12 areas and to assess progress towards a social "triple A" for the EU as a whole. This analysis will feed into the European Semester of economic policy coordination.

According to the community leaders “delivering on the Pillar's principles and rights is a dynamic process. The Pillar will inspire the work done in the context of the European Semester and on the completion of the Economic and Monetary Union, in line with the Five Presidents' Report. In particular, the Pillar should serve to re-start the process of convergence within the EMU and some of the principles and rights could act as guidance towards more binding standards for the euro area. Further EU legislative or non-legislative initiatives may follow in the future as part of the annual Commission Work Programmes. The European funds, in particularly the European Social Fund, will also provide financial support to implement many key aspects of the Pillar.”

The Pillar is presented today under two legal forms with identical content: as a Commission Recommendation, effective as of today, and as a proposal for a joint proclamation by the Parliament, the Council and theCommission. On this basis, the Commission will now enter into discussions with the European Parliament and the Council to work towards broad political support and high-level endorsement of the Pillar.

The EU is home to the most advanced welfare systems in the world and to a wealth of best practices and social innovations, but it needs to confront and adapt to unprecedented societal challenges. Although economic and social conditions across Europe have improved and employment has never been as high, the aftermath of the crisis of the last decade is still far-reaching, from long-term and youth unemployment to risks of poverty in many parts of Europe.

The Commission also pointed out that "the world of work and our societies are changing fast, with new opportunities and new challenges arising from globalisation, the digital revolution, changing work patterns and demographic developments. All levels of public authorities, social partners and civil society share a responsibility and an interest in working for a more prosperous and future-proof Europe, where economic and social developments go hand in hand."

In March 2016, the Commission presented a preliminary outline of the European Pillar of Social Rights, and launched a broad public consultation to gather feedback, among which were the contributions of the Basque Government.

All initiatives taken today are part of the Commission Work Programme for 2017. In the context of the annual Commission work programme other EU-wide initiatives may be debated.