The Basque Industry open for business in Hannover 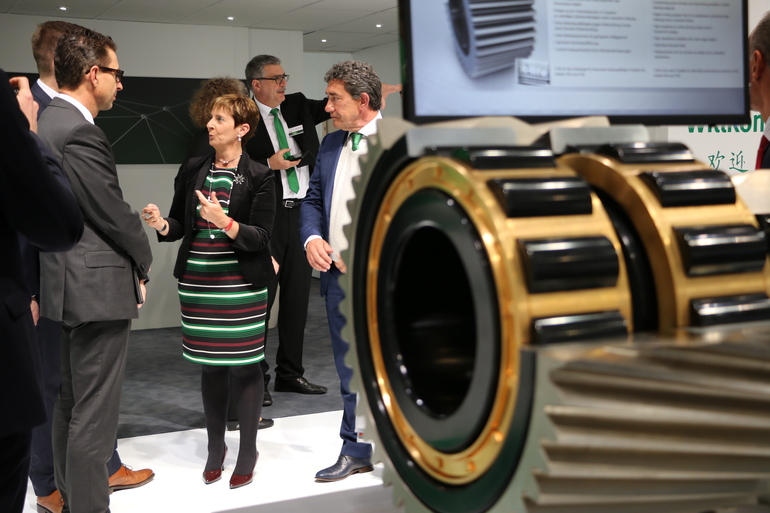 The Basque Country today stressed that its industry was open for business at the sector's main fair in Europe - the Hannover Messe -, whose official opening last night was attended by the German Chancellor, Angela Merkel.

This is the first time that the Basque Country is present with its own stand where it will showcase the potential of the Basque Industry 4.0 strategy from today until Friday 28 April. The spotlight will be on the new technology trends by using different media, including screens, virtual reality and augmented reality, along with 15 specific talks on 4.0 initiatives designed by different Basque stakeholders.

Furthermore, 26 Basque companies are attending this trade fair with their own space in order to showcase new products, look for partners and attract customers.

Representatives of the Basque Government, SPRI, Innobasque, clusters, technological partnerships and companies of the Basque Country were at the stand's opening ceremony where the fusion of Basque culture and industry attracted the interest of professionals from other countries who were in and around Pavilion 8, which is totally dedicated to advanced industry.

The ceremony was presided by the Basque Government's Minister for Economic Development and Infrastructures, Arantxa Tapia.  She gave a short speech when she defined the Basque Country as "a small country in size, but which likes a challenge". "Aware of the limitations of our size, we are committed to team work," referring to Basque Industry 4.0's private-public management model.

Given that representatives of the Federal Government of Germany's strategy 4.0 were present, the Minister stressed that the important aspect in the Basque Country is for private stakeholders and public institutions overall to share diagnosis, tools and solutions to progress collaboratively towards a new scenario where industry is rather more than manufacturing products.

The stand was visited by the Hannover Messe Vice-President, Marc Siemering, who expressed particular interest in BIND 4.0, the startup accelerator initiative, along with the Basque Digital Innovation Hub headed by Tecnalia and the gamification zone of the GAIA cluster and the VirtualWare company.

Leading players in the extension of Industry 4.0

Arantxa Tapia took the opportunity to stress the role that certain stakeholders are playing in driving Industry 4.0 and asked them to remain as key players in order for the Basque industrial fabric to advance together and ensure that nobody is left behind.

The entities that make up the Basque Industry 4.0 Steering Group are the ACICAE, AFM, GAIA and Energy clusters, the Tecnalia and IK4 technology platforms, Mondragón Unibertsitatea, the Basque Government, SPRI, Provincial Councils and INNOBASQUE. Along with the Steering Group members, the University of the Basque Country and the University of Deusto, along with numerous companies, have contributed contents. In total, over 40 organisations have been involved in providing attractive contents for the stand.

"We have pinpointed the best placed players to lead this industrial revolution.  The administration and SPRI is seeking to drive and encourage those players in order to implement a new way of designing, producing and serving our industry. It is our obligation to help the SMEs to sign up to the revolution and make sure no one is left behind," she concluded.

The visitors to the stand run by the Basque Country to showcase its industry will be able to collect information on the Basque strategy thanks to a newspaper in German and English and the screening of a video with testimonials by experts from leading business companies.

All that materials are already available from the new www.basqueindustry.eus platform which was set up in order to be an information and training benchmark for all the SMEs who need help to implement Industry 4.0.

The Basque Industry 4.0 stand is located at A36 in Pavilion 8 at Hannover Messe.  The stand space is 108 square metres, where there is a reception desk, an area for meetings and presentations and a virtual room.

Apart from the Basque Advanced Manufacturing strategy, this space is being used to showcase the most important and most significant projects that the universities, vocational training institutions, technology centres, cluster associations and companies are developing in the 4.0 field, using different media: screens, virtual reality, augmented reality, talks, etc.

.- 4.30 p.m. on 24 April, Pavilion 8 D19: as part of the Industry 4.0 meets the Industrial Internet Forum cycle, the  SPRI General Manager, Alexander Arriola, will talk about the Basque Country, a digital innovation hub.

Opening of the stand

Minister Arantxa Tapia will get the session underway and will give a talk entitled The Basque Country, an Attractive Place to Invest, and will be followed by Emilio Titos, Director of Mercedes-Benz Spain who will outline the experience of Mercedes, Germany's largest investor in the Basque Country. A discussion panel to share experiences of German investors in the Basque Country will then be set up, with the participation of  Ulrich Mehlmann (PMG Holding ­ Polmetasa), Valentín Guisasola (Shaeffler Group) and Thays Zapatero (Siemens).