The Basque Government opens its office in London and meets with the Minister for Trade and Investment, Greg Hands 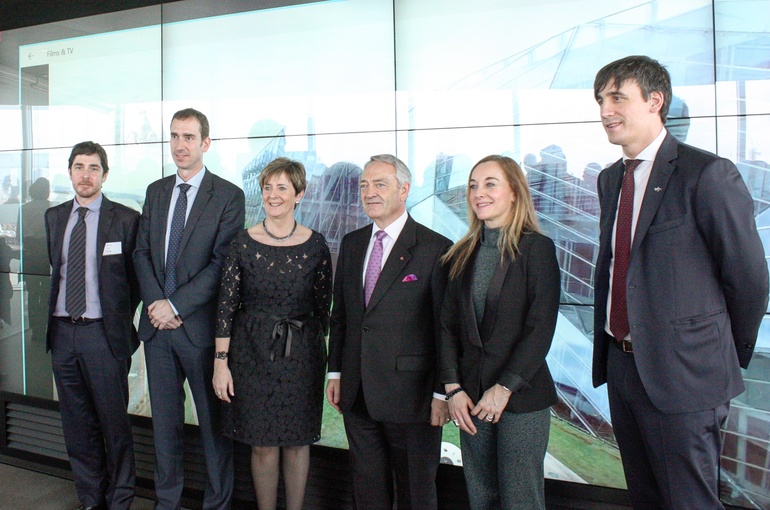 The London office was opened at noon (London time) today, with the Basque Government's Minister for Economic Development and Infrastructures, Arantxa Tapia, the Deputy Minister for Industry, Javier Zarraonandia, and the SPRI General Manager, Alex Arriola, in attendance. David Slater, Director of International Trade & Investment London & Partners, the offices where the opening ceremony was held, and the British MP, Simon Blagden, were also present, along with several managers of Basque companies doing business in the United Kingdom.

Prior to the opening of the new commercial office, Minister Arantxa Tapia met with the British Minister for Trade and Investment, Greg Hands, and they discussed aspects of different sectors, including energy and the automotive sector. The UK economy is the second most important of the European Union and the fifth largest in the world, and it is also one of the main destinations for Basque companies and has been in the top 4 over the last ten years. The two ministers thus discussed medium-term prospects and the anticipated business scenarios, particularly as regards the automotive sector.

With respect to the energy sector, Tapia outlined the projects underway in the Basque Country with a special emphasis on the offshore wind energy and they also spoke about possible partnerships for technological development.

Both leaders also discussed policies to support Industry 4.0 and they looked for areas of common interest and business and institutional cooperation opportunities.

The meeting lasted just over an hour and was held in the offices of the Department for International Trade.

The Basque Government delegation, led in this case by the Deputy Minister for Industry, Javier Zarraonandia, and the SPRI General Manager, Alex Arriola, also met this morning with representatives of Basque companies with offices in London. IDOM, Gescrap, Gestamp, Burdinola, Sener, CIE Automotive, López Landa, Maier, ITP Iberdrola, BBVA, Aernnova, CAF and Elecnor were at the meeting. They analysed the new scenario opening up with BREXIT and the opportunities that can be generated. The Basque companies are monitoring the Brexit process carefully, albeit that they are approaching the new scenario cautiously, while hoping to embrace its strengths for Basque companies on this market.

The opening of the London office opens up new business opportunities for Basque companies. Internationalisation is one of the strategic core areas for the Basque economy and the international network is fundamental to service those companies. The SPRI International Network currently has 16 own offices in different countries, including the one opened today in London, and specialist consultants in a further 60 countries.

As Minister Tapia pointed out, the office is going to be a meeting point in a country that is priority for our economy. "The United Kingdom has traditionally been and continues to be one of our main partners for international trade. The United Kingdom is the fifth destination for our exports, one of the top countries on the import ranking and one of the most interesting countries as a source of investment. Over fifty Basque companies are doing business in the United Kingdom in such diverse sectors as the automotive industry, energy, aerospace, engineering services, financial services and the railway industry.

The Basque Country is thus consolidating its presence in the United Kingdom, at a time where there are many doubts and question marks about Brexit, but which the Basque Government sees as future opportunities for Basque companies.

The office will in turn be the place to offer our services and products to British companies and institutions. Tapia stressed that "Euskadi - the Basque Country - has a globally-oriented economy. A technologically advanced, modern economy, with globally-connected business and present in numerous international markets".

Minister Tapia also mentioned the time of uncertainty surrounding Brexit, but wanted to be optimistic about the challenged faced, "I only want to say that I hope and want these negotiations, which I hope will be pragmatic and dispassionate, to lead to the best possible agreement, to a new positive relationship, which guarantees a new era for the two parties that continues to be based on exchange, cooperation, free trade and the development and creation of wealth and employment for everyone. In any event, I also want to express here and now that, whatever the scenario turns out to be in this new post-Brexit stage, the Basque Government is determined and today here pledges to help and support Basque companies in their relations and activities in and with the United Kingdom. We are ready to play our part to facilitate and drive those relations, proof of which is this office that we are today opening in the City":