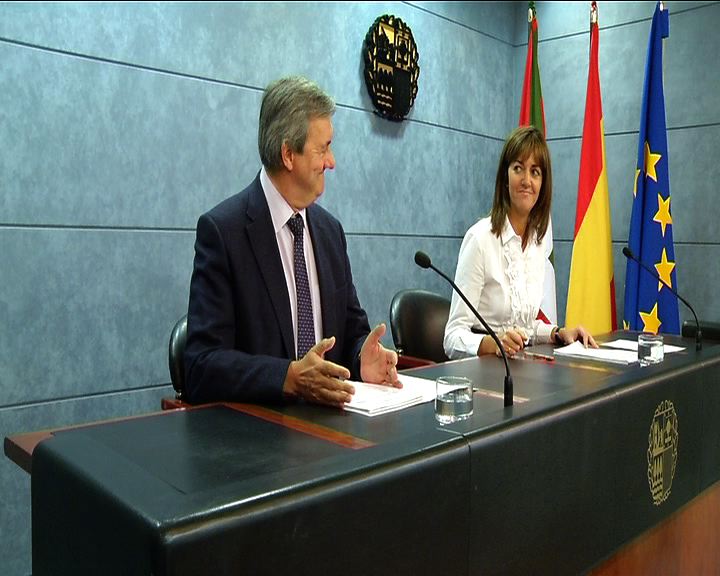 In the 2011 Budget, the Basque Government will assign an additional 8% of its resources to productive investment in comparison with 2010. This increase, which in conjunction with the financial capital operations of the public sector companies will increase total investment by 18% for the coming year, is the result of surplus from tax collection that produced more than initial estimates. Thus, the Executive of Patxi López will assign a further 249 million euros "to investment in transport, the environment, productive forces and technology in order to consolidate the change in the production model that we require to advance towards a more productive and sustainable society from a social and environmental point of view," according to the Minister for the Economy and the Treasury, Carlos Aguirre.

The Basque Government, in the Cabinet Meeting celebrated this morning in the Lehendakaritza, passed a motion to assign 249 million euros to strategic productive investment in the energy sector, strategic infrastructures, the productive economy and the promotion of research and innovation. The Minister for the Economy and the Treasury, Carlos Aguirre, explained that this new investment increases the initially planned investment for the 2011 Budget by 8%, which, in conjunction with the financial capital operations of the public sector companies, raises total investment for the coming year by 18%. The minister drew attention to the "significant effort" made by the Executive "to consolidate the change in the production model that we require to advance towards a more productive and sustainable society from a social and environmental point of view."

During his appearance, Mendia also expressed the "complete support and absolute confidence" of the Basque Government with regards to the directors of ETB [Basque Public Television], drawing attention to the fact that "for the first time in its history" the board of directors is composed of "competent and independent professionals at the head of this public body." "The Basque Government demands a radio and television company that is plural, of high quality and committed to the delegitimisation of terrorism," Mendia explained, affirming that the current board of directors of EITB "clearly understands that these are its objectives and is working towards these goals."

With regards to the conflict in the Sahara, which yesterday led to violence in El Aaiún, the spokesperson urged the Spanish Government and the European Union "to play a more active role in the resolution of the Sahara conflict," calling for the opening of "an independent investigation into the events." Mendia expressed her "concern in relation to these very serious developments and deep regret for the death of Saharan civilians and members of the Moroccan police force."

With regards Remembrance Day, set to take place on Wednesday the 19th, the spokesperson of the Executive, Idoia Mendia, stated that "it is a homage that all the parties owe to the victims of terrorism, which has caused so much suffering in this country." The act will not include the participation of all parliamentary groups: Aralar and EA do not support the institutional statement that will be read in the Town and City Halls of the Basque Country and in the Palace of Ajuria Enea during the acts paying homage to victims of terrorism that have been organised by the Basque Parliament, a circumstance that the spokesperson has "deeply" regretted. "We should be accompanying the victims on an occasion that is so special for them," she affirmed.

Furthermore, the Cabinet today passed the Decree for the implementation of the system of comprehensive aid for victims of terrorism. This represents the implementation of the measures outlined in the Law for Recognition and Redress for Victims of Terrorism to develop a comprehensive system of interrelated protection and aid that attends to each and every need of the victims of terrorism.

The Decree passed today by the Executive at the behest of the Ministers for the Interior, Education, Universities and Research, Justice and Public Administration, Housing, Public Works and Transport, Employment and Social Affairs and Health and Consumer Affairs aims to establish a system of comprehensive aid for the victims of terrorism in all areas in which the Basque Public Administration has competence.

To this end, the Decree complements and implements the actions foreseen in the Law in terms of the benefits covered by the system in areas such as the economic limits of benefit or issues of procedure and organisation. In addition, it implements certain types of aid, protection and recognition that pursue the same objective, such as those relating to legal aid.

As a general proposal, the Decree passed today regulates the benefits and administrative measures aimed at redressing the damage caused by acts of terrorism, attempting to guarantee full restitution in all matters that are subject to reparation and comprehensive aid for victims in all areas that prove necessary to enable them to recover a normal life.
The specific actions contemplated include aid to compensate for material damage resulting from terrorist acts, taking in damage to housing and expenses deriving from provisional accommodation or relocation and damage to vehicles or industrial and commercial establishments or the offices of political parties, trade unions and social organisations. In a similar vein, the Decree contemplates subsidies for the installation of preventative security systems.

With regards to legal aid for the victims of acts of terrorism, the Decree contemplates subsidies to meet expenses deriving from legal defence and representation and the filing of lawsuits as a plaintiff in criminal proceedings.

In terms of health, aid is provided to cover all expenses relating to physical and psychophysical damage that is the result of acts of terrorism. Aid will be provided via the resources of the health system, or, in the case of an emergency, via state-subsidised private centres.

With regards to education, aid is established to offset the expense of academic services, including grants and study aids and academic transfers.

In terms of employment, measures are specified for victims' reincorporation into the job market. In the case of civil servants, transfers will be facilitated and support measures will be adopted to facilitate access to leave and the reduction of working hours, amongst other measures.

In the area of housing, measures will be introduced to aid the adaptation of housing to meet the needs of victims with disabilities and aid for rental properties, amongst other measures.

The Decree also contemplates the possibility of extraordinary aid in the event of situations that are not contemplated within the framework of general aid.

Finally, the Decree also regulates the requisites to be fulfilled to obtain aid, the deadline for the presentation of requests and all details relating to the processing of requests. It also specifies that the aid contemplated is compatible with aid offered by other Administrations, providing that the total aid provided does not exceed the damages occasioned, or represent excessive financing for the activity to be financed or duplication of aid.