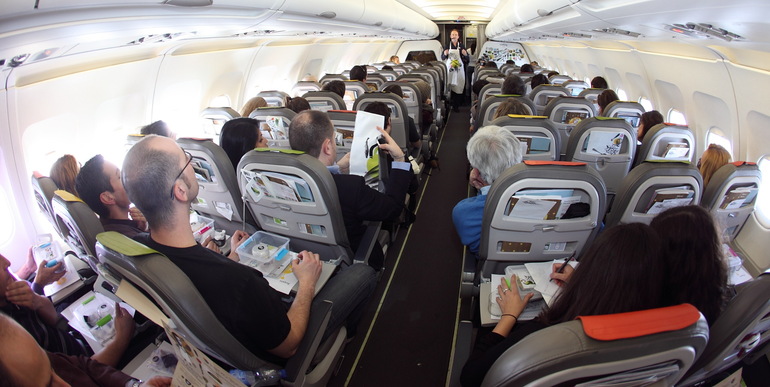 The new route, which will operate four times per week, establishes a direct connection with Italy's economic and financial capital

The chef Josean Merino has delighted passengers on the Milan-Bilbao flight with an exclusive, innovative and surprising gastronomical tasting session

The Basque Government's Department for Industry, Innovation, Trade and Tourism, working through Basquetour, and Vueling, the new generation airline, have celebrated the launch of the new direct route between Milan and Bilbao with a special flight led by the chef Josean Merino from the MarmitaCo Restaurant in Vitoria-Gasteiz, an expert gourmet and fan of the fusion of innovation and gastronomy.

Today, the Department for Industry, Innovation, Trade and Tourism, Basquetour, Vueling, and Josean Merino have made it possible for the cabin of an Airbus A-320 to be transformed, during a flight of one hour and twenty minutes, into a high-end restaurant, allowing Basque and Italian passengers alike to enjoy haute cuisine tapas.

Lluís Pons, Vueling's Marketing Director, commented: "Today we are taking this special flight to celebrate the inauguration of this new route - an excellent piece of news for Vueling, as it means that we are extending the range of flights we offer from the Basque country, consolidating our position as leaders at the Loiu airport and providing a new direct international flight which we hope will have the same great reception as the Amsterdam connection which we recently established".

The Director of Basquetour, Ana Izaguirre, said that "this route provides yet another opportunity to bring the Basque country closer to one of our priority markets, Italy, which we are certain will increase the number of tourists coming to our country. Italy is a country with which we have already been working with extraordinary results, and this event also represents a step forward in trade relations".

Flight VY1451 to Bilbao took off at 12.50 pm from the Milan-Malpensa airport ready to ensure that it left "a very good taste in people's mouths". The event took place once the flight had reached an altitude of 30,000 feet and was travelling at cruising speed. Vueling's Marketing Director Lluís Pons, together with the Director of Basquetour, Ana Izaguirre, welcomed the lucky passengers while the crew handed out gastronomical kits which had been specially prepared for the occasion by the renowned Basque chef Josean Merino, who was delighted to be able to take his kitchen to new heights for a few hours to celebrate this new flight route.

The menu was as follows:

"Pintxo Euskading", put together by each passenger with instructions from Josean Merino

Passengers were also able to take home a small pack containing a little taste of the Basque country.

Vueling commits to the Basque country

The airline commences flights to Italy from Loiu with this new route, while in 2011 another new direct connection with Rome will enter into operation. As well as offering direct flights, Vueling also provides passengers from Bilbao with routes via Barcelona to other Italian cities - Rome, Pisa, Palermo, and Venice.

Timetable of the new route (Mondays, Wednesdays, Fridays, and Sundays):

In addition to the Milan route, attention should also be drawn to the new international link with Amsterdam comprising three weekly flights that entered into operation on the 29th March of this year.

This winter season, Vueling, which, having established itself in Loiu in December 2004, is currently the leading company operating from the airport, will be offering more than half a million seats from Bilbao to a total of 28 destinations, 11 of these being offered exclusively.

Merino is a self-taught chef who studied at the Artxanda Basque College of Hostelry, specialising in hotel services. He later realised that his real passion was cookery.

Over the course of the last three years, the MarmitaCo Restaurant was named as one of the best 10 pintxo (tapa) bars in the country at the Lomejordelagastronomía Conference.

Merino's tapas have been awarded prizes in various competitions, and he has given talks in various spheres both on cuisine and marketing in the restaurant sector. In 2009, his "Floración" tapa was named Best Avant-Garde Tapa of Spain at the 2009 Alavesa Trade Federation's Awards for Innovation.

As well as directing the MarmitaCo Restaurant, Merino also provides consultancy services and develops business ideas related to the hotel and restaurant sector in general, in addition to working on R&D projects in the food industry.

Vueling have been innovating in the airline sector for more than six years now, developing cutting edge ideas to share their success and new projects with their clients, as well as transmitting the spirit of the company to their passengers. In the past they have celebrated events such as a fashion show on a flight to the capital of fashion during Paris Fashion Week, the media premiere of the film Timecrimes on a flight between Barcelona and Tenerife, and the live music session of the famous DJ and producer David Guetta on the virgin flight of the route between Paris and Ibiza.

The company was launched on the 1st of July 2004 with the aim of offering an excellent service to customers at competitive prices. They currently operate a total of 98 routes, and are present in 48 airports in Europe, North Africa, and the Middle East. They have six operating bases in Barcelona (their headquarters), Madrid, Seville, Malaga, Bilbao, and Valencia. The company currently boasts a fleet of 37 Airbus A-320 planes and has transported more than 30 million passengers since its foundation.

The Basque tourism agency Basquetour is a public sector company created by the Basque Government's Department for Industry, Innovation, Trade and Tourism to lead the promotion and implementation of the tourism competitiveness strategy defined for the region, in collaboration with private and public bodies working in the tourism industry in the Basque country. During the last year and a half, the new strategies and campaigns implemented have yielded excellent results in visitor and overnight stay numbers, the highest figures yet in the history of Basque tourism. Consequently, Basquetour continues to work in this line of expansion, offering quality tourism beyond the region's borders, as well as the possibility of taking advantage of a range of tourism experiences.