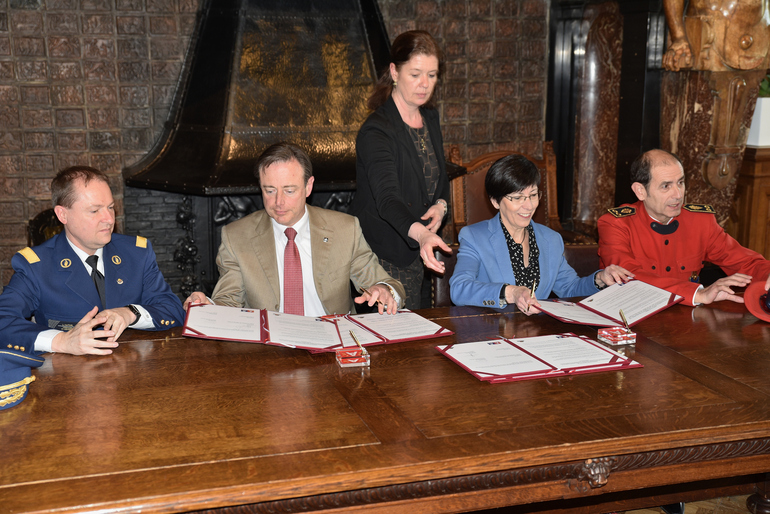 The Basque Government's Minister for Security, the city Major and the respective police chiefs signed the agreement today at Antwerp City Hall

The Ertzaintza (Basque National Police Force) and the Antwerp Police Force have signed a joint declaration to intensify the cooperation between both forces in the framework of the European Union. The document was signed by the Basque Government's Minister for Security, Estefanía Beltrán de Heredia, the Antwerp Mayor, Bard de Wever, the head of the Ertzaintza, Jorge Aldekoa, and the Antwerp Police Chief, Serge Muyters at Antwerp City Hall this afternoon.

The mutual cooperation agreement signed today is part of the undertakings in the Memorandum of Understanding, signed by the autonomous governments of the Basque Country and Flanders in Brussels in June 2015.  The aim is to step up the European unification process and work together in the consolidation of freedom, security and justice within the European Union, while respecting the international obligations of both autonomous governments and their respective States.

Specifically, the document signed in the Flemish city today envisages sharing experiences both in the area of combating and preventing delinquency and in the tasks related to security and law enforcement, particularly as regards fighting terrorism and organised crime, the international trafficking of stolen vehicles, counterfeiting documents and drug trafficking.,

The agreement also includes knowledge sharing in areas such as police training and development programmes, organisational structures and new technologies.  It also envisages the mechanisms for exchange visits to the respective facilities.

Renewal of the agreement with Bavaria

The document signed by the Ertzaintza and the Antwerp Police Force is a further link in the Ertzaintza's chain of relationships with other police authorities around the world, in order to share expertise and knowledge in order to improve the services provided to the general public. Thus, the signing of a similar document with the Bavaria State Police Force is planned for April to update the agreement signed with that authority in 1995.

The Ertzaintza has held useful talks with authorities such as the New York Police Force, the Colombian National Force and the Mexican Police Force, along with specific coordination mechanisms with police force throughout Europe for certain actions, particularly those related with sports events involving large numbers of fans travelling.