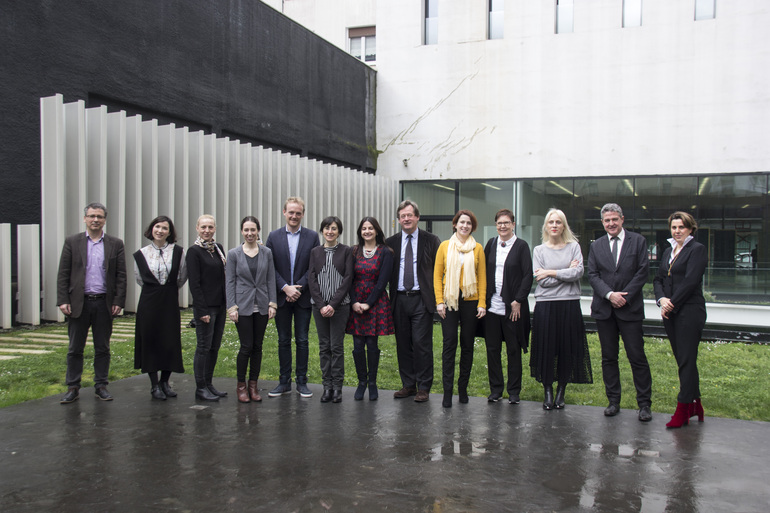 Under the leadership of the Basque Government with European funding through the INTERREG Europe Programme, 6 territories have come together to promote innovation and economic development focussing upon Cultural and Creative Industries.

Bilbao and Donostia-San Sebastián have witnessed the launch/kick-off meeting and initial work meeting of the partners of the European project CREADIS3- Smart Specialisation Creative Districts. The Department for Culture and Language Policy of the Basque Government, in cooperation with Etxepare Institute and with the collaboration of the Basque Government Delegation to the European Union, is in charge of leading this project for a 5-year period. Along with the Basque Country, the project includes participants from one State, and four European regions, these being: Slovakia, Central Finland, Emilia-Romagna, Wallonia and Western Greece.

The project has a budget of 1.4 million and receives 85% of its funding from the INTERREG Europe Programme and will be coordinated and led by a multidisciplinary team from the Basque Government. CREADIS3 aligns itself with the potential the cultural and creative industries provide to territories and to regional development.

CREADIS3 will make it possible to align the public policy agendas of the 6 territories, in order to strategically boost and articulate the potential of the Cultural and Creative Industries (CCIs), thus contributing to territorial and regional economic development. The growing importance of CCIs in the European economy can be underscored thanks to the CREADIS3 project, by improving cultural policies, and linking cultural businesses to innovation and competitiveness, in line with the Smart Specialisation Strategies in each territory.

The Regional Minister for Culture and Language Policy of the Basque Government, Mr. Bingen Zupiria, the Basque Deputy Minister for Culture, Mr. Josean Muñoz, as well as the Director of the Etxepare Institute, Mrs Miren Arzalluz have all actively participated in the work meetings held on March 7 and 8. At this initial stage the project partners have already approved the work plan, the short and long-term stages, the results to be achieved, as well as the joint actions and work methodology to be implemented at a European level.

The meetings have also promoted several study visits to different leading Basque cultural entities, such as the Guggenheim Museum, the Azkuna Zentroa cultural centre in Bilbao, the Balenciaga Museum as well as Tabakalera and the Etxepare Institute.

CCIs in Europe: contribute 4.2% to the GDP

The European Commission assigns CCIs a special strategic quality due to their dynamic nature, structural contribution to production and employment – valued at approximately 4.2% of the EU’s joint GDP and more than 7 million jobs, 3.3% of the total European employment-, and its potential for growth in the years ahead.

The CREADIS 3 project emerges with the key objective to coordinate territorial public policy agendas in order to support the development of more efficient policies in those territories seeking to generate innovation and economic development centred upon cultural policies. The aim is therefore, to improve institutional governance and strengthen the contribution of ICCs to territorial development. In order to achieve this the following objectives will be pursued:

In order for it to be a collaborative process, it has been agreed that each partner during the development of CREADIS 3 will be the leader of a specific topic. The methodology used will be carried out in pairs in order to further the relations between territories.

The background to the project has a much to do with the emergence of the Regional Initiative for Culture and Creativity (RICC) in 2014, an informal European network comprised of 25 regional governments, lead by the Basque Country, Emilia-Romagna and Friuli-Venezia-Giulia. The network made it possible to further the cooperation between European innovation institutions and stakeholders in the field of CCIs.

After undertaking several projects and study the importance of CCIs, the RICC network concluded that the CCIs were lacking agendas at a regional level. According to its conclusions, greater coordination was required in order to create positive prior conditions and a favourable environment to develop the potential of the CCIs and strengthen their innovation. It is here that the Basque Government got involved, taking the initiative to implement the RICC network’s recommendations and identifying the INTERREG European Programme as an opportunity to set up synergies between cultural and economic development.