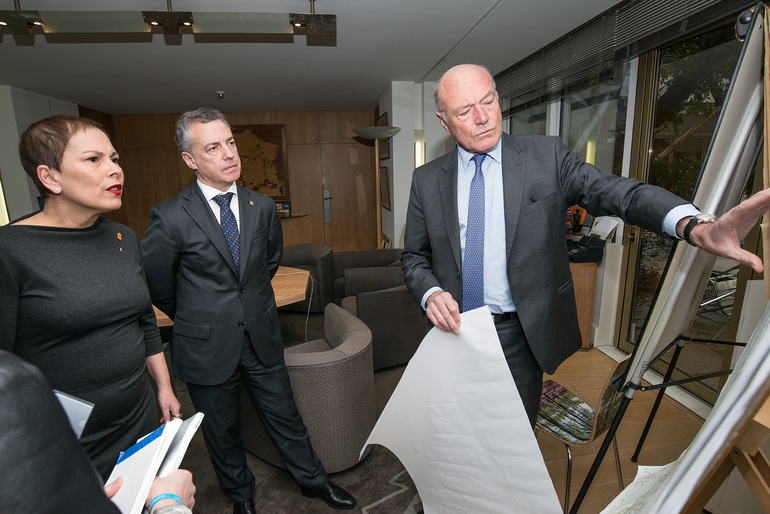 This morning, Lehendakari Iñigo Urkullu, the Basque Premier, took part in the meeting held by the Aquitaine/Basque Country/Navarra Euroregion Assembly in Bordeaux. It was the first assembly where Navarra has officially participated as a member of the Euroregion. The leaders of Nouvelle-Aquitaine, Alain Rousset, and of Navarra, Uxue Barkos, heading their respective delegations, also attended the meeting.

The Basque Government's Minister for Economic Development and Infrastructures, Arantxa Tapia, its Minister for Education, Cristina Uriarte Toledo, its Minister for Tourism, Trade and Consumption, Alfredo Retortillo, its Secretary General for External Action, María Ángeles Elorza, and its Director for European Affairs, Mikel Antón, travelled to Bordeaux with the Lehendakari.

During his speech, the Lehendakari pointed out that the incorporation of Navarra marked the start of a new stage, as he believes that it consolidates the institutional strength of the Euroregion, reinforces cross-border cooperation, and increases the capacity of the States and the European Union to engage in dialogue. "We are talking about greater efficiency and about better performance prospects," he said.

The Lehendakari stressed the deployment of High Speed Rail and the rail connection between the three territories, driving cross-border employment, and linguistic and cultural development as strategic objectives of the Euroregion.

The Bordeaux Assemly analysed the actions envisaged for 2017, taking into account the core areas set for the Euroregion.

This year, the Euroregion plans to implement the Irakaslegaiak AEN project, which will award grants totalling EUR 660,000 to students on teacher training courses at the public universities of the Euroregion so that they can teach in Basque and Occitan in the state schools of the French educational system.

Impetus will continue to be given to student mobility and the II Erasmus Euroregional call has been announced to complement the Erasums grants, and which will seek to double the number of Euroregional ones. PhD students will also be able to apply.

As regards employment, a project (co-financed by European Territorial Cooperation funds) will be run that involves conducting a study to diagnose cross-border employment and to search for solutions.  An information portal for workers, the unemployed and companies will likewise be set up.

The Euroregion will also drive the Atlantic Corridor, in other words, the passenger and freight railway corridor that connects the ports on the Atlantic coast with the hinterland and the rest of Europe, to ensure it becomes a reality as soon as possible. In addition, Nouvelle-Aquitaine, the Basque Country and Navarra will work to interconnect their own railway network without delay in order to open up new transport opportunities.

Finally, the Euroregion will launch two new grant calls for projects this year. The first offers funding totalling EUR 400,000 to projects related to culture, education, sport, youth and multilingualism, and the second - planned for the second half of the year and worth EUR 300,000 - will be for Euroregional strategic partnerships in the core area of the knowledge economy, innovation and company competitiveness.

Now that Navarra is a member, the Euroregion has a population of nearly 9 million inhabitants (2% of the EU population).  Its budget will also be increased up to a total of EUR 1,650,000 this year.