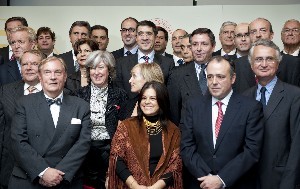 Lopez took part in the ceremony held to commemorate the 85th anniversary of the Consular Corps of Bilbao, held at the Palacio Euskalduna

The Lehendakari highlighted the role that the Basque consular corps has had as the guarantor of democratic institutions, even during the Civil War and dictatorship, forming a bridge between the new Basque Country and other countries

The Lehendakari, Patxi Lopez, urged the consuls based in Bilbao to act as "our ambassadors in the world" and to convey in their respective countries the "true image of the Basque Country" as "a compassionate, pro-European and civilised society", "rather than a country immersed in permanent conflict". Lopez pointed out the important role played by the consular corps throughout history, as the "guarantor of democratic institutions", even during the Civil War and dictatorship.

The 45 consuls based in Bilbao, representatives of their own respective countries, on four continents, took part in the ceremony to commemorate the 85th anniversary of the creation of the association that represents them in the Basque Country, at the Palacio Euskalduna in Bilbao.

During his speech, the Lehendakari praised the work done in Bilbao by the Basque consular corps, which has been both a "witness and active player in the history of this city". Lopez expressed his opinion that "the consular corps represents the living history of the Basque Country and maintains, now more than ever before, its role as a bridge to other countries" and that the consuls association "is a great forum of cultural exchange that already forms part of the very essence of the city". He went on to emphasise that, "Bilbao is an example of a city that has successfully redesigned itself in order to change its economic, social and cultural model and to face the challenges of the 21st century from a position of strength" and "they are the best example of the desire of this city to maintain its links with other countries".

For that reason, the Lehendakari encouraged the consuls to disseminate "what is really important when attending to the needs of the Basques", and to abandon "a foreign policy based excessively on identity and symbolism". "We want to strengthen our ties with other countries through economic, tourism or cultural relations". We need "to reformulate our activities abroad to help us reach higher levels of social welfare and quality of life here in the Basque Country" and concluded, "This is the Basque Country we want people to know".