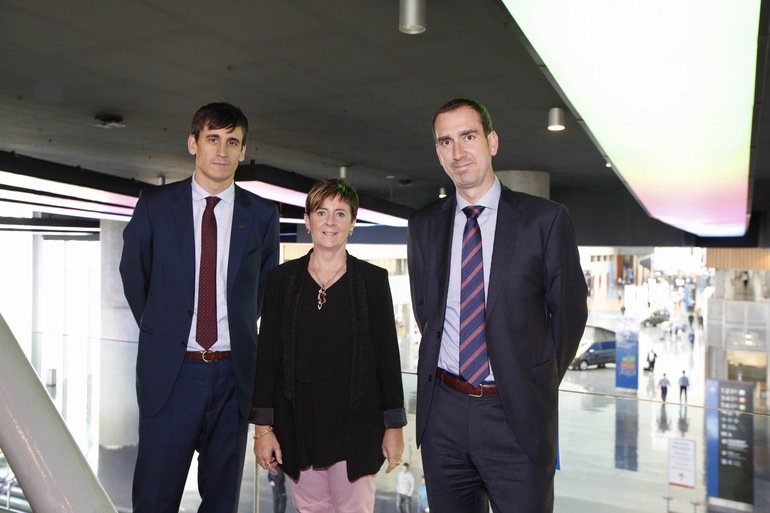 -      The mission will open the new Batz factory, will meet with the Basque companies established in China and institutional meetings will be held with local authorities

-      The delegation, headed by the Deputy Minister for Industry, Javier Zarraonandia,  has a busy work schedule over the five days

-      222 Basque companies established in China, the vast majority located on the country’s east coast, particularly in Shanghai and Jiangsu

Starting on 16 January, a Basque Government delegation will be leading an institutional and trade mission to China, during which it will meet with the Basque companies established in the Asian country and will attend the opening of a new Batz factory.  During the five days of the visit, the delegation will also hold meetings with the local government of the Jiangsu region and its business chamber, the largest in China which brings together over 170,000 companies.

The delegation, headed by the Deputy Minister for Industry of the Basque Government’s Ministry for Economic Development and Infrastructures, Javier Zarraonandia, the Director of Internationalization, Ainhoa Ondarzabal, and the General Manager of the SPRI Group (the Basque business agency answering to the Ministry for Economic Development and Infrastructures) Alexander Arriola, are to meet this Monday in Beijing with Fagor Automation and Gamesa, the Basque renewable energy company, a sector in which China is heavily investing. There will be a work session with the Basque companies Fagor Automotion, Gamesa, Iraeta and Hine on the first day.

On Tuesday, the Basque delegation will be in Zhejiang province, where it will visit the Maier factory, one of its production units in China by means of a joint venture with a local company. Exterior and interior automotive components are designed and manufactured at this plant.  In the afternoon, the delegation will visit another factory, belonging to Urola, which works on the dairy, detergent and lubricant market.  It likewise has a Chinese partner, Giant Holding, one of the main manufacturers of lifts and elevators.

On Wednesday, the mission will travel to Jiangsu province, which is home to the highest concentration of Basque companies in China, with 43 production and commercial ventures.  The plan is to visit the Copreci plant in Kunshan, which manufactures domestic ovens, and the new Gestamp die-making factory, GGM Gestool China. The day will end with a session between the delegation and the managers of the Mondragón Group at the Kunshan industrial park.

On Thursday, the work programme is more institutional in nature with the visit with the Jiangsu authorities, which has been twinned with the Basque Country since 2010.  There will be a lunch with the Jiangsu Government’s Department for Foreign Affairs, the interlocutor of the institutional relationship with the Basque Country and driver of trade relations.  The Jiangsu Federation of Industry & Commerce, the non-profit governmental entity, made up of commercial and industrial entities of Jiangsu province, which brings together over 170,000 companies, will also be at the meeting.

In September 2015, the SPRI Group director signed an agreement with this entity to strengthen exchanges and cooperations in the institutional, business and commercial sphere, the establishing of business contacts, promoting business and mutual investments, developing cooperation projects, establishing contact between companies and organisations, organising fairs, seminars, congresses, conferences, sectoral and trade missions.

Thursday will end with a visit, in Nanjing, to the Huawei centre, the global leader of information and communication solutions set up at the Zamudio Science and Technology Park.

The mission ends on Friday, with the opening of the Batz factory, its fourth plant in China, in Kunshan, which will expand the existing one at this industrial park for the Basque company’s stamping process. The new production plant is 4,200 square metres of built space. There will a meeting in the evening with the Basque companies in China.

China currently has 133 Basque companies with a presence in China (including the Hong Kong and Taiwan administrative regions), which have established 222 commercial and production ventures in the country. The vast majority located on the country’s east coast, particularly in Shanghai and Jiangsu Nearly half of those companies belong to the mechanical equipment and the machinery sector.

The Basque Government, through the SPRI Group, already visited this Asian country in September 2015 to contact Basque companies and sign the agreement with the Jiangsu Business Chamber. The aim then, as is the case for the current visit, was for the delegation to see for themselves the situation of the Basque companies established at this country, analyse what is their situation after the changes arising from the country’s economic situation and continue developing institutional relations between the Basque Country and China.