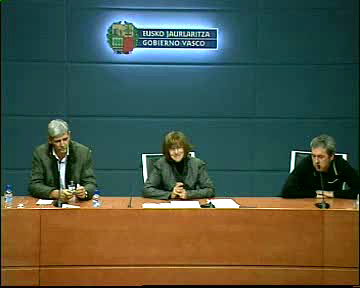 Fermín Etxegoien will receive the award for his novel Autokarabana in the Basque language section, an "exhaustive" chronicle of the current life of Basque speakers, with their "deficiencies and confusions." José Fernández de la Sota will receive the award in the Spanish language section for Vacilación, a work wherein "each poem opens a window on to the next, constructing a harmonious and profound representation of doubt."

The Basque Government's Minister for Culture, Blanca Urgell, publicly announced the recipients of the 2010 Euskadi Literature Awards: Fermín Etxegoien for his novel Autokarabana in the Basque language section and José Fernández de la Sota for his work Vacilación in the Spanish language section.

The Minister also explained the reasons behind the jury's decision. In the case of Autokarabana, published by Pamiela, the jury felt that the book represents an "exhaustive and very intimate chronicle of life in our period, of the Basque speaker, with our deficiencies and confusions." The sarcastic point of view of the protagonist and narrator informs us of his reality as it occurs, that is, it transmits the sensations of his daily life. "The human being of today wants to have everything without refusing anything: We want the city and the countryside, a family life and a lover, a career and freedom, which explains the metaphor of the autokarabana [camper van], a symbol of home and freedom." This results in duplicity throughout the entire work: he loves his daughter, he wants to be with her, but he finds the weekends they spend together boring.

Vacilación published by Basaría, is, in the jury's opinion "a book that must be read, a dialogue with the most important literary tradition." According to the Minister for Culture, in the structure of the book "each poem opens a window on to the next, constructing a harmonious and profound representation of doubt and the drive of nonbeing."

The recipients of the awards will each relieve 18,000 euros and an additional 4000 euros of the work is published in another language.