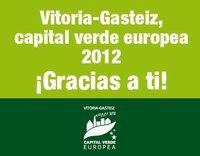 Towards the end if the night, the Lehendakari contacted the Mayor of Vitoria to congratulate him personally

The Lehendakari, Patxi López, has expressed his satisfaction as a result of Vitoria-Gasteiz's assignment as the 2012 European Green Capital, following the public release of the jury's decision in Stockholm (Sweden). "This European award represents international support for Vitoria's firm commitment to sustainability and the reconciliation of the quality of life its citizens and environmental protection", the Lehendakari stated after becoming aware of the news.

Towards the end of the night, Patxi López contacted the Mayor of Vitoria, Patxi Lazcoz, who was present in the Swedish capital along with a municipal delegation, and personally congratulated him for the recognition achieved by the capital of the autonomous region. "As Lehendakari and as someone who has learned to love Vitoria as much as my place of birth, I am very proud of the fact that Vitoria's environmental commitment has been so highly evaluated. This recognition, should be celebrated by the Basque people as a whole because over the course of 2012 the Basque Country will have European standing as a modern region that cares for the environment." The Lehendakari encouraged the residents of Vitoria to be happy about the award and drew attention to the fact that the achievement is enhanced by the quality of the rivals that Vitoria faced: Barcelona, the Swedish city of Malmö, the French city of Nantes, the Icelandic city of Reykjavik and the German city of Nuremberg.

Having drawn attention to the fact that, in addition, the University of the Basque Country, Euskal Erico Unibertsitatea, was recognised today as a "Campus of Excellence", which the Lehendakari also celebrated, Patxi López underlined that these developments represent international support for the Basque Country's strategic commitment to knowledge and innovation, on the one hand, and sustainability, on the other.