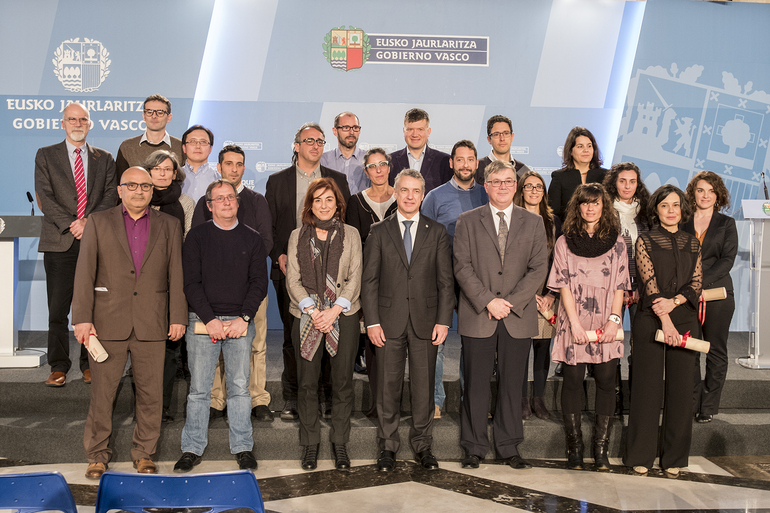 • 20 scientists from all areas of expertise joined the universities and research centres of the Basque Country thanks to the Research Professor and Research Fellow programmes.

• The annual diploma ceremony was held at the Lehendakaritza and was attended by representatives of universities, research centres and technology centres.

• Ikerbasque currently has 206 researchers contracted. All the researchers, from 31 different countries, have international experience and have joined Basque universities and R&D research centres.

The 2016 intake of Ikerbasque research staff were welcomed today by Lehendakari Iñigo Urkullu,  the Basque Premier, and by the Minister for Education, Cristina Uriarte, during the annual event held at the Lehendakariza.

Lehendakari Iñigo Urkullu presided the ceremony to hand out diplomas to the 20 scientists from all areas of expertise that joined the universities and research centres of the Basque Country thanks to the Research Professor and Research Fellow programmes.

Fernando Cossío also took part in the ceremony, which was attended by representatives of the universities, research centres and technology centres of the Basque Country.

The Research Professor call, which resulted in 9 new additions in 2016, is aimed at established researchers with extensive international experience and leadership capacity.  Proof of this is that some of the newcomers joined as scientific directors or have ERC Grants, the top European funding for scientific research.

The Research Fellow programme, in turn, is a specifically designed initiative to attract experts in different branches who are under 40 to and retain them in the Basque Country in order to create a “talent pool” of scientists and researchers.  It was set up in 2012 and has a dual function: on the one hand, to attract scientists who are working abroad, including local researchers who had left at some point of their career, and, on the other hand, to offer opportunities to consolidate their track record to those already embarked on research in the Basque Country. Thanks to the Research Fellow programme, there were 11 additions in 2015.

In addition to these two calls, there is the recently-launched Research Associated programme, which seeks to be a bridge between those two categories so that Ikerbasque can cover the different stages of the research career to complete what is currently available for young researchers and for established scientists.

Ikerbasque currently has 206 people contracted between Research Professor and Research Fellow, who have joined the Basque Science, Technology and Innovation System.   Public and private universities and R&D centres of the Basque Country are benefitting from the contributions of experts in very diverse fields, ranging from experimental sciences to humanities, and including medicine, technical studies and engineering, and social sciences.

The attached PDF sets out the line of research of each of the researchers that have today received the award.