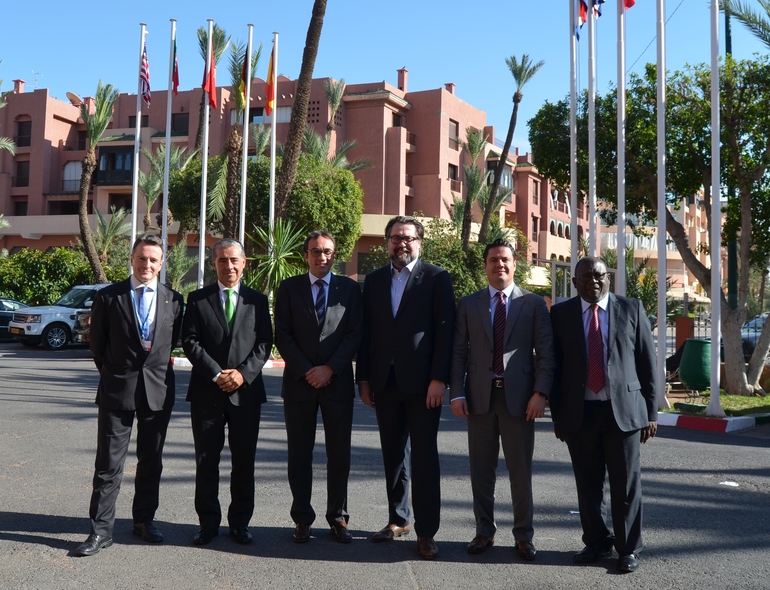 The Basque Government Deputy Minister for the Environment, Iosu Madariaga, highlighted this morning at The Climate Group’s General Assembly of the States and Regions Alliance taking place as part of the COP22 in Marrakech, that “ the work of these countries and regions constitutes the first mechanism of drawing up environmental reports for the states, countries and regions and, thanks to this, today 62 governments report these environmental indicators first hand”.  At the meeting, the Basque Country transferred the co-presidency of the European section of The Climate Group to Catalonia.

There had been three world co-presidencies of The Climate Group to date, and today the Basque Country presented the two new co-presidencies for Africa – KwaZulu-Natal, with its premier Willies Mchunu – and for Latin America, with Jalisco-Mexico and its governor, Aristóteles Sandoval. The Asia-Pacific co-presidency is held by South Australia, with Jay Weatherill; North America is co-presided by Quebec with its premier Philippe Couillard, and the new co-presidency for Europe corresponds to Catalonia with the President Carles Puigdemont, to whom the Basque Lehendakari Iñigo Urkullu passed on the position.

“With their backing and determination, and with all of The Climate Group team, we will achieve results from our mitigation and adaptation work all over the planet which will make us feel proud in the coming years” said Iosu Madariaga to the new co-presidents of the States and Regions Alliance.

“During the period of our co-presidency in Europe we have highlighted and disseminated the role and the importance of the regions, countries and sub-state nations in implementing climate policies, an effort recognised in the Paris agreement” detailed Deputy Minister Madariaga.

Iosu Madariaga explained that “the Compact of States and Regions was presented at the New York Climate Summit in September 2014 as a pioneer initiative and as the first report-presenting mechanism for states, provinces and regions. Today 62 governments report. The Compact of States and Regions not only provides solid evidence demonstrating the power and potential impact of climate actions, but also provides an essential source of information for backing collaboration and the formulation of policies between the regional governments”.

Madariaga stressed the need “to fulfil the global commitment of the regions to reduce emissions by at least 80% by 2050. Ratification of the Paris Agreement consolidates the framework of the Basque Government policies in relation to climate change and towards a low carbon economy”.

The Deputy Minister also stated that “the Basque Country action plan is defined in the Basque Country Climate Change Strategy and in the Basque Country Energy Strategy 2030 approved in 2015 and 2016. Our policies for progressing towards a low carbon economy focus on saving energy by improving efficiency, increasing renewable energy use and promoting the use of alternative energy sources for transport in all sectors of the economy”.