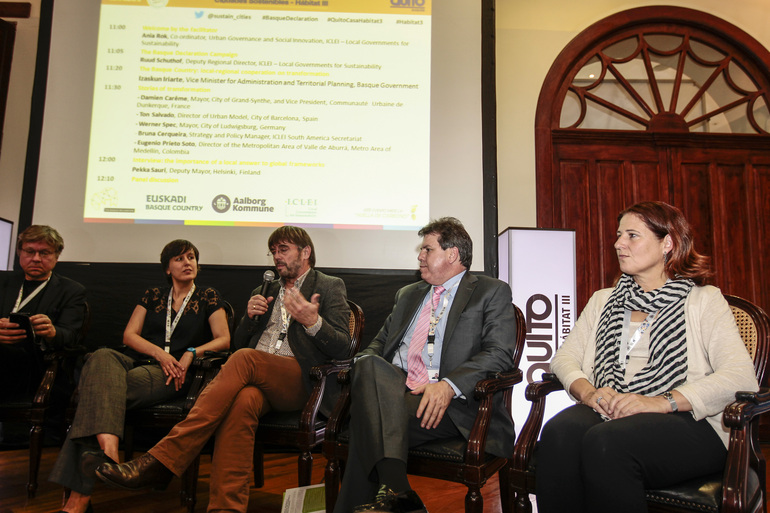 In an event co-organised by ICLEI Europe and the Basque Country at the Sustainable Cities Campus of Habitat III, European and Latin American cities and regions showcased their transformative actions, as inspired by the Basque Declaration.

Ruud Schuthof, Deputy Regional Director of ICLEI Europe, introduced how the Basque Declaration helps cities to transform their areas into sustainable places to live. It thereby also helps national governments meet their global commitments, such as the New Urban Agenda and the Sustainable Development Goals (SDGs).

The recently launched Sustainable Cities Platform was also presented to the audience. Izaskun Iriarte, Deputy Minister for Administration and Territorial Planning of the Basque Country, encouraged cities, organisations and citizens attending the event to endorse the Basque Declaration and praised the document for being a concrete roadmap for transformation.

At the event, different representatives of cities worldwide shared their experience and transformative actions in line with the Basque Declaration:

Pekka Sauri, Mayor of Helsinki, remarked that the move to sustainability has to take place at the local level, as cities and towns rather than states are the primary places where people live. Damien Carême, Mayor of the City of Grande-Synthe, France, presented what the city is doing to integrate immigrants and to improve their daily lives. Werner Spec, Mayor of Ludwigsburg, Germany, remarked the relevance of engaging citizens to co-create and transform cities. Ton Salvado, Director of Urban Model at the City of Barcelona, shared the city’s “superblocks” mobility plan and explained how it will contribute to reduce the number of cars, as well as to pedestrianise streets. Eugenio Prieto, Director of the Metropolitan Area of Valle de Aburrá, Metro Area of Medellín, Colombia, focused on the challenges the Colombian city is facing and highlighted that the Basque Declaration is a very inspirational document for the city that aims at developing a regional action plan.