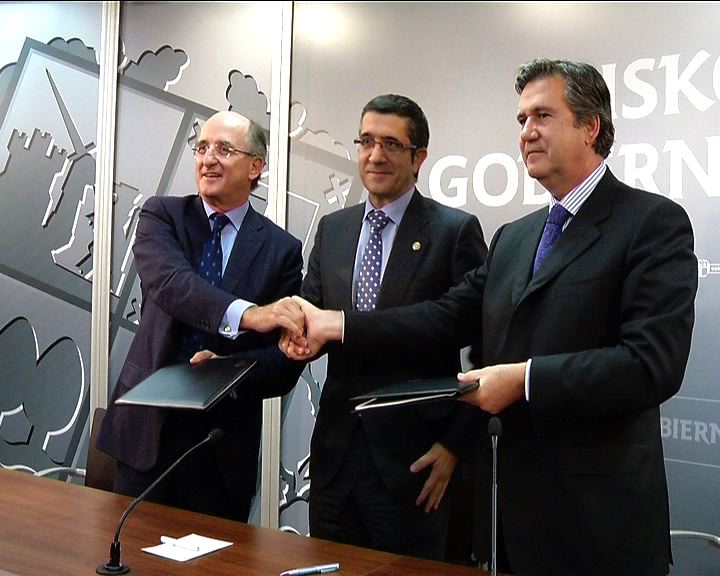 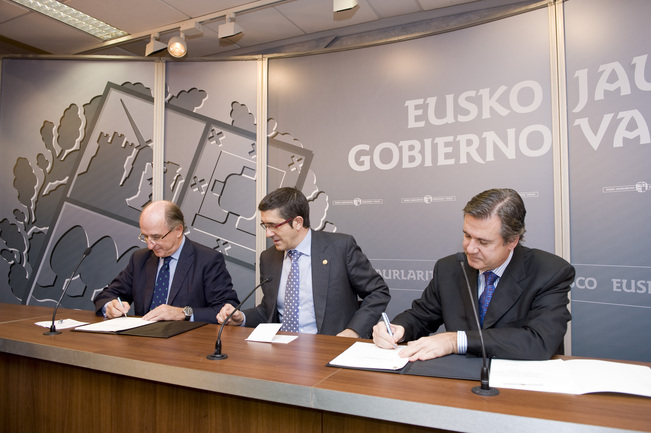 The Basque Country will have 85 electric vehicle charging points in 2011. This is the first objective of the new IBIL partnership, in which both EVE and REPSOL have a 50% stake, and which came into being this morning with the signing of a protocol of intention in an act attended by the Lehendakari, Patxi López, the Minister for Industry, Innovation, Trade and Tourism, Bernabé Unda, and the president of REPSOL, Antonio Brufau. This initiative marks the commencement of the electric vehicle's deployment in the Basque Country, which aims to have 41,000 vehicles of this type by 2020, and 226,000 by 2030. The Lehendakari has emphasized how this "ambitious" project will result in "significant benefits for the Basque Country".

The Lehendakari, Patxi López, has underlined the importance of today's step, whereby the Basque Country becomes a "pioneer" in the field of the electric vehicle. The aim of this initiative is to obtain energy "more efficiently and in a more sustainable manner, in a sector wherein practically all of the energy consumed today comes from petroleum, a fuel that entails high dependency on other nations, high energy bills and high levels of CO2 emissions". "Via this strategy, our first goal is to ensure that 10% of the vehicles sold in the Basque Country are electric vehicles (pure or plug-in hybrids) by 2020", he added.

From the aforementioned date up until June 2010, both companies strove to draw up the technical specifications of the charging stations that will be deployed in coming years, designing the network and drafting the business plan for the company that has now been created for this purpose. Two working groups were set up for this task: a technical group and a managerial group, featuring representatives from both companies. External technical assistance was also called in, for both technical and business aspects.

In this way, the Basque Country has complied with the guidelines laid down by the European Commission, which proposes the electric vehicle as the most rational mobility solution for the next decade. The agreement signed today represents a boost for the Basque automotive sector, as the Mercedes factory in Vitoria-Gasteiz will manufacture these vehicles. Furthermore, this agreement guarantees the mobility of the electric vehicle within the entire Autonomous Region and will create a critical mass of vehicles in circulation, bringing forward their consolidation within the market.

The new partnership created by EVE and REPSOL

The new partnership goes by the name of IBIL, Gestor de Carga de Vehiculo Electrico (Electric Vehicle Charging Management), S.A. Both EVE and REPSOL will each have a 50% stake in the new company, which will be based in Bilbao and will operate as the electric charge manager as defined by the Spanish Electricity Sector Act. Its mission is to develop a network and infrastructure for charging electric vehicles and for marketing charging services (electricity and value-added services) in the public sector and related areas. It aims to become a leader in terms of the number of public charging points in the Basque Country and to set the standard in the state market for electric vehicle charging technologies.

According to the plan, the first charging points will be installed at the following locations:

- At selected points on the roadside to reassure EV users in the event that their battery is running low. These points will be on the main roads and at service stations.

IBIL's involvement in this initiative aims to provide a vital boost for an activity wherein full economic profitability and mass implementation will only be achieved in the long term, something which may dissuade some potential private investors. IBIL is pursuing the two-fold goal of guaranteeing the mobility of the electric vehicle throughout the entire Basque Country and of introducing the Basque energy and electronics sectors into this new market.

Penetration of the electric vehicle in the Basque Country

IBIL's business plan is part of a wider strategy to promote the electric vehicle, which has forecast slow-paced growth in the number of electric vehicles in circulation, aiming to ensure that 10% of all vehicles registered in 2020 are electric vehicles. This target will not be achieved if potential users feel that it is only possible to travel locally due to a lack of charging points that would enable long-distance journeys. For this reason, during the initial years, it is deemed necessary to install charging points at a faster rate than the sale of vehicles, in an effort to mitigate this feeling of insecurity amongst potential EV users and to encourage purchases of this type of car.

The expected launch date for each of the different charging types (slow, semi-fast and fast), as well as the preferred locations for each type can be consulted in the following figure, which also illustrates the new partnership's intention to initiate pilot projects prior to the planned date, both for the semi-fast and the fast charges.