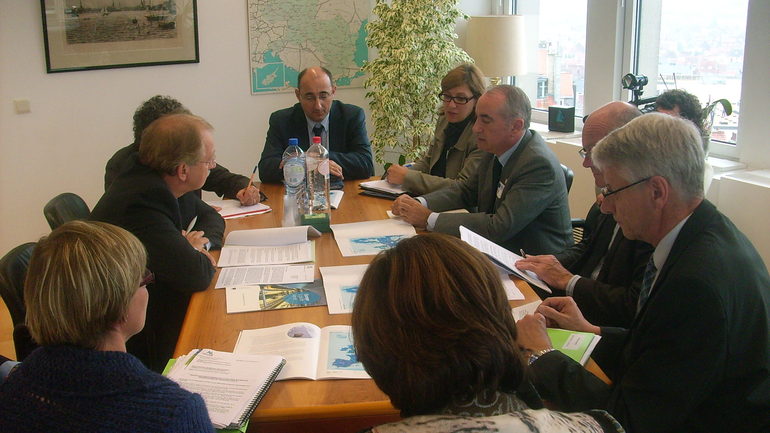 The Basque Minister for Housing, Public Works and Transport, Iñaki Arriola, and the President of Aquitaine, Alain Rousset, led the delegations from the Basque Country and the French region that met with the European Commission's Director General for Mobility and Transport, Matthias Ruete, this morning in Brussels.

Mr Arriola and Mr Rousset informed Mr Ruete in relation to the progress of the high-speed rail project and expressed the need for the strategic axis number 3, affecting the Atlantic railway axis, to remain a priority for Europe and thereby obtain the greatest possible funding from the European Union.

According to Mr Arriola, Mr Ruete congratulated them for the progress made in the high-speed rail project in the Basque Country, particularly in the Gipuzkoa section, and reiterated the strategic character of the Atlantic axis for the European Union, as it entails the high-speed connection of the countries of southern Europe. Therefore, the Basque Government is confident that axis number 3, which affects the Atlantic axis, will remain a priority of the European Union that will be speedily implemented.

Mr Arriola drew attention to the fact that the Basque section in Spain is "in a considerable more advanced stage" than the French section, whilst affirming the "the French are in the process of defining future actions and in this sense the President of Aquitaine has demonstrated a keen interest in having the project advance in French territory and in the region of Aquitaine, in order to connect with the Basque section."

"We have a special relationship with Aquitaine, indeed, the Basque Country and Aquitaine have signed a collaboration agreement and one of the most important aspects of this collaboration involves the implementation of the high-speed rail project," Mr Arriola stated.

The Basque Minister also affirmed that this is considered as a strategic project by both the Spanish and Basque governments, expressing his confidence that work will continue at the planned rate, concluding in 2016. Moreover, he underlined the fact that, in the 2011 budgets, the Basque Government has assigned 275 million euros to the project, 50 million more than this year, to continue to make advances in Gipuzkoa, the section that comes under the Basque Government's responsibility. The budgetary increase is logical, he explained, as the rate of progress in the Gipuzkoa section is vitally important. "Thus, by the end of the year eleven sections will be under construction and some time around February, work will begin on a further two sections. This means that economic contribution will be required to ensure that work continues at the planned rate.

In relation to the connection between Irun and Hendaye, Mr Arriola pointed out that the definition and specifics of the connection were the responsibility of French and Spanish governments and that advances had been made in the meeting between these parties that will enable the Basque Y to be connected to French and European networks.

At the conclusion of the meeting the Director General for Transport and the Minister went to the see the electric Mercedes Vito van, which is to be built in Vitoria-Gasteiz, that as a result of an initiative set in motion by the Basque Government and the City Hall of Vitoria-Gasteiz, has been afforded the role of official car of the Committee's open days, currently being celebrated in Brussels.