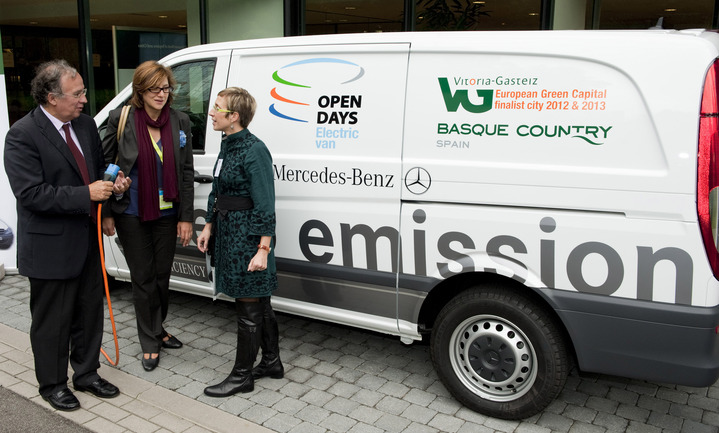 86th plenary session of the Committee of the Regions

In Brussels, the Basque Government's General Secretary for Overseas Action, Guillermo Echenique, is currently participating in the 86th plenary session of the Committee of the Regions, being held from the 4th to the 7th of October. In addition, the plenary session coincides with the annual event on regional development organised by the Committee of the Regions and the European Commission, entitled Open Days - 8th European Week of Regions and Cities, which features the participation of the Basque Country.

In the calendar of activities of the Committee of the Regions, Echenique will also be defending the interests of the Basque Country in the electric car intergroup. Similarly, in connection with the Basque Electric Vehicle Strategy and as a result of all the work and dedication contributed to the intergroup, the Basque Country will be presenting the electric van, now in production at the Mercedes-Benz factory in Vitoria, to the European institutions.

Both the European Commissioner for the Environment, Janez Potoznik, and the President of the Committee of the Regions (CoR), Mercedes Bresso (accompanied by the General Secretary, the Basque Country delegate in Brussels, Marta Marín, and the Environmental Councillor of Vitoria-Gasteiz, Alba Cañadas) expressed their interest in the electric van, which has been publicly displayed for the first time in several locations around the Belgian capital. The electric van, which went into production this summer in Vitoria-Gasteiz, has become one of the best examples of sustainable development in Europe.

With regards to the future strategy of the EU, entitled "EU 2020 European Strategy", Echenique will be reminding the political representatives of the European regions of the need to push for a decentralised focus on policies as a result of the increased intervention of Structural Funds in terms of the efficient use of resources (environmental, energy and sustainable transport).

In the area of the environment, the Basque Government's representative will be defending the need for inter-institutional and inter-sectoral coordination and collaboration to achieve authentic multi-level governance and to consolidate a proactive commitment on the part of the regions to future environmental policy. The General Secretary will propose the backing of a sustainable production model that mitigates negative impact on the environment and the health of citizens, generating new economic activities oriented towards achieving these goals.

He will also support the creation of regional indicators that are better suited to evaluating the progress of the regions, stressing that GDP does not necessarily have to be used as the basis, whilst proposing that the "Regions 2020" study prepared by the European Commission be taken into account.

The Basque Country's consolidated participation in the "Automotive Crisis" intergroup

On Wednesday the 6th of October, the 7th meeting of the "Automotive Crisis" intergroup of the Committee of the Regions (CoR) is due to take place, with the participation of Guillermo Echenique, the Basque Government's General Secretary for Overseas Action.

The aim of the meeting is to analyse, along with representatives from the rest of the European regions, the future prospects of the automotive sector, with particular emphasis on ecological vehicles, and to define the working plan of this intergroup for the coming years.

The "Automotive Crisis" intergroup of the CoR is formed by a group of 47 European regions and aims to promote the role of the regions in the search for proposals and initiatives to alleviate the crisis in the automotive industry.

The Basque Government has taken part in the European debate from the outset and has also participated in the public referendums that have been carried out by European authorities, joining the first European Strategy on Clean and Energy Efficient Vehicles, launched by the European Commission on the 28th of April this year.

The presence of Guillermo Echenique at this meeting highlights the Basque Government's decisive commitment to leading Europe in the development of the electric car. For this reason, collaboration agreements have been made with Repsol (one of the world's most important energy companies) for the design and implementation of the basic network of recharging points for electric vehicles in the Basque Country, and with Mercedes Benz, for the manufacture of electric vans at its Vitoria-Gasteiz factory. The van, which went into production in July, is currently on show in the Belgian capital.

Similarly, in September, the Basque Country joined EV20 (Electric Vehicle 20), a group that aims to become a world leader in the development of the electric car and which is composed of a small number of national and regional governments and international companies.