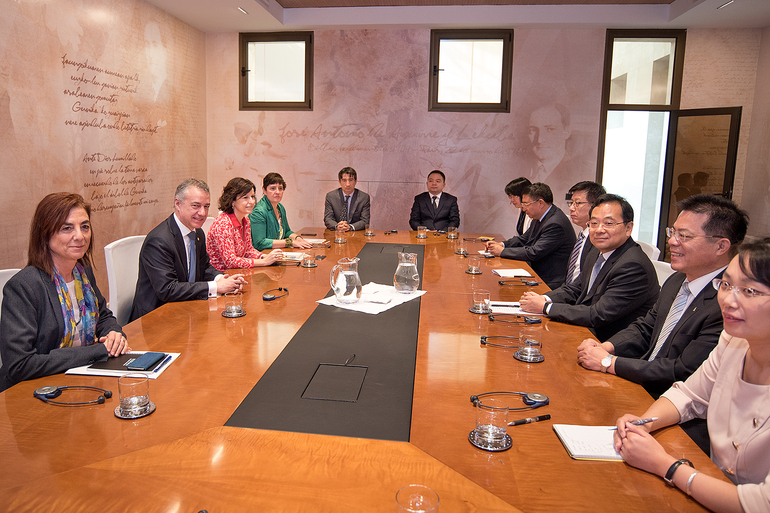 The official visit to the Basque Country led by the Jiangsu Deputy Governor, Zhang Lei, will continue until tomorrow, Tuesday.

Lehendakari Iñigo Urkullu, the Basque Premier, accompanied by the Basque Government’s Minister for Education, Linguistic Policy and Culture, Cristina Urkullu, this morning welcomed a delegation from Jiangsu (China), led by its Deputy Governor, Zhang Lei. The official visit is part of Jiangsu’s interest in the Basque Educational System. In this regard, the Chinese province will sign a memorandum of understanding with the University of the Basque Country.

The Memorandum seeks to strengthen the cooperation between the UPV/EHU and leading Jiangsu universities for student exchanges and joint research programmes. It also involves the donation of 1400 book on Chinese culture to the UPV/EHU with the aim of creating a twin library with Jiangsu Province.

The delegation is made up of 10 members who will hold meetings with the Basque Government’s Secretary for External Action during the institutional visit, as well as with the Mondragón Group, which has several plants in the town of Kunshan, and will meet with the Chancellor of the UPV/EHU, Iñaki Goirizelaia, and members of his team. During their stay, they will also have the opportunity to discover for themselves the urban development model of Bilbao and the Basque capital, Vitoria-Gasteiz.

Since 2012, there has been a Partnership Agreement in force between Jiangsu and the Basque Government, making Jiangsu one of the members of the Network of Strategic Partners of the Basque Government in terms external relations.  It is therefore not the first official trip that members of the Government of the Chinese province Jiangsu have made to the Basque Country. In 2014, Minister Oregi held a meeting with the Jiangsu Deputy Chairman on the Basque policies to prevent the environmental impact caused by the increase of industry. In March this year, Minister Erkoreka was also sent a copy of the Code of Ethics and Conduct translated into Chinese in order to use it as the benchmark model for its public officials in the commitment for political renewal and good governance values.

Jiangsu, with a population of 76.7 million inhabitants, has become one of the most powerful of China’s provinces and it has the second largest nominal GDP. Its growing infrastructures and its industrial zones have caught the attention of foreign investment, which makes it the leading destination of the Asian giant.  There are already 912,000 private companies already installed in the province, including 41 Basque ones.

Jiangsu has an extensive tradition in the manufacturing sector and is immersed in the process to transform its development model and improve its economic structure. It is a transformation based on the modernization and optimization of the traditional industry, with a clear commitment to technology and innovation. Similar characteristics to the industrial model pursued by the Basque Country.