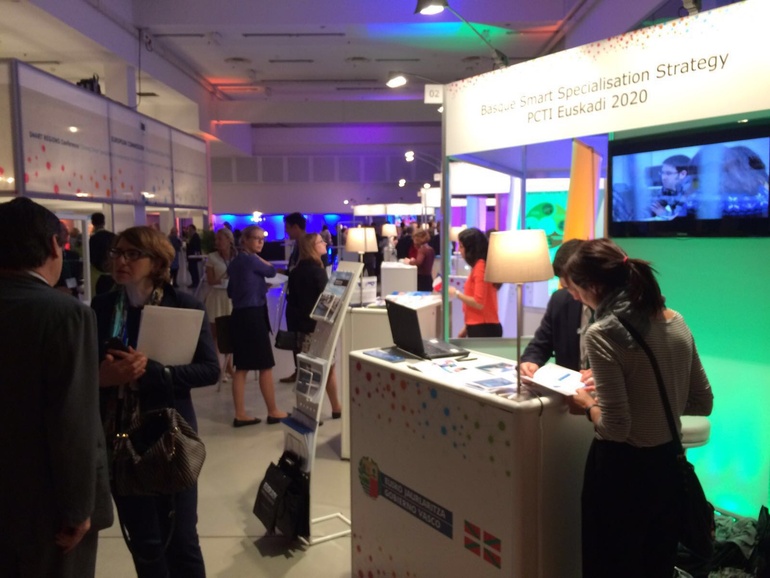 During the  “Smart Regions” High Level Conference, organised by the European Commission in Brussels on 1 and 2 June, the Basque Country  showcased the advances in the deployment of its  RIS 3 Smart Specialisation Strategy (Euskadi 2020 Science, Techology and Innovation Plan).

The smart specialisation platforms in the areas of industrial modernisation and agri-food, which have been added to the one existing in the area of energy, were officially launched during the event. These platforms imply the adoption, throughout Europe, of the methodology developed by the Vanguard Initiative to create joint investment partnerships.

Specifically, the Basque Delegation to the EU moderated the roundtable on the pilot scheme that it is heading as part of the "Advanced Manufacturing for Energy related applications in harsh environment" Vanguard Initiative.  In this context, the Advanced Manufacturing Centre of the wind power sector – WINDBOX was showcased. The discussion revealed the need to establish a European scheme to support advanced manufacturing centres and the joint demonstration projects in this area.

Furthermore, the Basque Government expressed its interest in heading the agri-food smart specialisation platform together with the ERIAFF (European Regions for Innovation in Agriculture, Food and Forestry) network. On the other hand, the Basque Country, through the Regional Initiative for Culture and Creativity (RICC) network, has been invited to present its areas of interest in the sphere of cultural and creative industries.

Parallel to the High Level Conference, the Commission organised an exhibition where the Basque Country, along with around thirty European regions, had an information stands on the development of its RIS3 and its flagship projects. This exhibition space provided an opportunity to interact with representatives of European institutions, of other European countries and regions, as well as from industry and the academic world.

Advanced Manufacturing combines the greatest concentration of capacities, both regarding scientific-technological resource accumulation and R&D results, and regarding the dimension of the recipient business sectors that exploit the research.

The business activity of the Energy sector is highly focused on certain economic sectors that comprise one of the main vertical sectors of the Basque Country where there are also leading driving forces. There is a significant concentration of scientific-technological capacities.

The Biosciences area is noted for the concentration of stakeholders and expertise developed in recent years, particularly in the human health segment, where the participation of all scientific-technological stakeholders is significant.

Apart from these priority areas, a series of a activities linked to the territory with potential for their business and scientific-technological development have been identified as “opportunity niches”. Specifically, the following activities have been pinpointed as areas of opportunity: agro-food sector, ecosystems & environmental regeneration, cultural, tourist & creative industries.  Activities related to urban development and territorial planning.

Since the end of 2013, the Basque Country is a founding member of the Vanguard Initiative. The 30 members regions of the Vanguard initiative are committed to smart specialisation, not only as a pre-requisite for the European cohesion policy, but also as the driving principle of its innovation and industrial policies in order to foster competitiveness and growth.

The Vanguard Initiative seeks to speed up the integration of smart specialisation in European industry and innovation policies, and to show that the regions may be key drivers when mobilising all political levels and all the stakeholders in the interest of new growth.

The Basque Country, along with Scotland is leading the Energy Pilot Scheme known as “Advanced Manufacturing for Energy Related Applications in Harsh Environments”.

The aim of this energy pilot scheme, one of the 5 underway within the initiative, is to position Europe as a global leader in the development and manufacturing and equipment and components in high value added for installations related to the generation of marine renewable energies and the extraction of energy resources in highly-demanding environments (offshore and/or great depths). ADMA Energy is currently working with the leading companies of the pilot scheme’s value chains in the 13 member regions to jointly prepare a Technology Roadmap for Advanced Manufacturing for Energy Related Applications in Harsh Environments.