Lehendakari: "Arasur brings the key elements together that our Country needs with investment in infrastructures and opening up to the outside world" 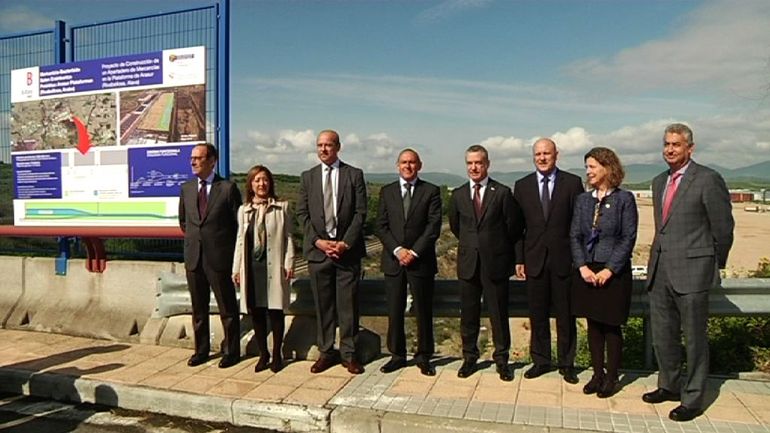 Lehendakari Iñigo Urkullu deems that Arasur's logistical platform in Rivabellosa, “brings the key elements together that our Country needs with investment in modernising infrastructures, belief in sustainable growth, opening up to the outside world, support for real economy and public-private collaboration”. This morning, the Basque president visited the work being carried out by the Port of Bilbao, building a railway to develop a "dry port" or logistical loading platform on the European Atlantic corridor.

"This is a project shared with public and private entities, conjointly investing and collaborating to develop a dry port that opens up opportunities for companies and improves our Country's logistical competitiveness," stated Iñigo Urkullu, who, along with the Port President Asier Atutxa, Chairman of the Regional Government Ramiro Gonz, Ribera Baja's mayor, Peio Ruiz, President of Arasur, Luis Viana , and Minister of the Basque Country Environment and Territorial Policy, Ana Oregi, carefully listened to explanations given by those in charge of the work.

In the Lehendakari's opinion, "the location of Arasur, the platform where the dry port is being developed, is strategic in the Ebro hub, well-connected with road and rail transport. It is a meeting point for different forms of transport, facilitating exportation and importation operations for companies in our hinterland”. The ARASUR logistical platform is a project shared by the Basque Government, the Regional Government of Álava, Saba, Kutxabank and Bilbao Port Authorities.

"We are aware of funding, and therefore budget issues. Today, it is more necessary than ever to know how to prioritise public spending and seriously invest in what truly matters. Our engagement with social policies is guaranteed. Today, I would like to emphasise investment capability in strategic projects such as ARASUR, which offers new opportunities for economic reactivation, growth and job creation in Araba and Euskadi," added the Lehendakari.

The total investment in the railway being built in the Arasur industrial park is 10 million euros. One-third of the investment is for the land, and the rest is for construction, with site delivery within 15 months.

"ARASUR is a logistical, economic and environmental project," declared the Lehendakari. "This will be the logistical hub for importation and exportation traffic for the entire surrounding business world in connection with the Port of Bilbao. The positive economic impact promotes profitability for surrounding companies, and also provides environmental advantages in using the railway as a transport method."

Iñigo Urkullu reminded that, "I have often said that Euskadi needs a shared future project. Today, I am compelled to admit that here, at ARASUR, I can see the key elements together that our Country needs: investment in modernising infrastructures, belief in sustainable growth, opening up to the outside world, support for real economy and public-private collaboration. Together, we believe and are investing in a shared project for the Country."

Furthermore, Chairman of the Regional Government of Araba/Álava, Ramiro González highlighted the fact that "this work is an important milestone in developing the Álava project as a logistical hub in south-western Europe.  The Regional Government shall continue to work to make logistics a driving force behind our territory's economic development."

The President of the Bilbao Port Authorities, Asier Atutxa, recalled that, a few short days after joining the Port Presidency, the Basque Government communicated "its interest in participating in Arasur and in aligning with the leadership's strategic focus on making Euskadi a logistical hub with Lezo, Jundiz, Arasur, airports and ports. Since then, we have held meetings with the Basque Country Department of the Environment and Territorial Policy, with the Regional Government and with Arasur's majority shareholders to demonstrate our will to participate in order to create synergies in the Country."

In parallel fashion, when we approved our strategic plan to draw new traffic and broaden the market, one of the fundamental premises was to strengthen intermodality and reinforce our presence at dry ports whenever there was a potential market. At Araba and in its adjoining areas, this potential exists," stated Asier Atutxa.

In the Port Authority President's opinion, "Bilbao is Araba's port, because it has lines connecting it with 900 ports all over the world, infrastructures for all sorts of traffic and services provided by our port community. Yet as a port, we still need something else if we want to be more competitive and maintain market share, while drawing other traffic using other routes or road transport to reach northern Europe. This something else is called intermodality and flexibility."

The figures provided by the Port show that 6.3 million tonnes, coming from or going to Araba/Álava and the nearest hinterland, La Rioja and Navarra, are exported or imported by roadway or through ports other than Bilbao. Out of those 6.3 million, it is estimated that 2.2 could be transferred to the Port of Bilbao, with competitive advantages for the transporter if combined with the Arasur railway platform.

"For this reason, and so as to create Country synergies and to draw new traffic, we signed a collaboration agreement in March of last year with the Basque Government and the Regional Government of Araba. The result was the tender, and later awarding of works which for us play a key role in being here today, a railway connection, and for Arasur, strategies to drive this platform," added Atutxa.

"This project will connect Bilbao with its strategic hinterland, propel Arasur's activity, promote localisation of companies in the area, and shake up the Basque economy, all while offering competitive advantages to transporters and benefits in general for the environment by promoting lesser roadway traffic. This was made possible thanks to the great understanding between the parties involved. For this reason, with this project in pursuit of the common good, Arasur is a winner, Araba is a winner, and Euskadi is a winner, as well," said Asier Atutxa.

The Port Authorities of Bilbao led the site visit to Arasur's railway platform, where Asier Atutxa accompanied the Lehendakari, Iñigo Urkullu, the Minister of the Environment and Territorial Policy, Ana Oregi, the Chairman of the Regional Government, Ramiro González, the Regional Government Chairman's Lieutenant and manager of Economic Development and Territorial Balance, Pilar García de Salazar, the Mayor of Rivabellosa, Peio Ruiz, president and Manager of Arasur, Luis Viana and Asier Axpe, in addition to other authorities and business representatives.

The project was awarded in a public tender for the sum of 5,319,584 euros (not including VAT) to the TBA formed by Construcciones Mariezcurrena, S.L. and Construcciones y Promociones Coprosa, S.A. Site delivery is within 15 months. The facility will have two tracks for receiving and expediting trains, and another two for loading and unloading. The four tracks will be 450 metres long with Iberian width and the possibility of migrating to international width. Furthermore, there will be a loading and unloading beach to facilitating modal merchandise exchange.

This strategic work is the result of the collaboration agreement signed by the Basque Government, the Regional Government of Álava and Port Authorities to install an operational railway base at the Port of Bilbao at this logistical platform. Port Authorities managed the site tender, but three entities participated in financing it.

Moreover, at the beginning of December 2015, Port Authorities purchased around 68,500 m2 of surface area for approximately 3 million euros to make this connection to the Railway System of General Interest and to operate the dry port later on.