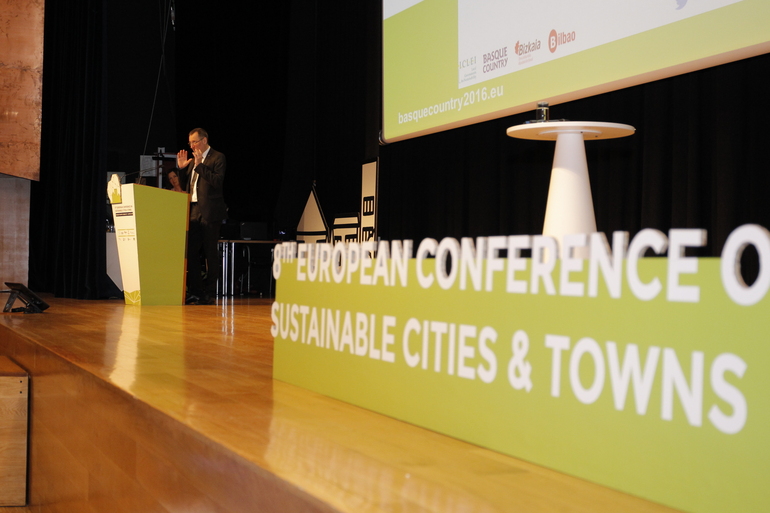 “At present, we create our wealth at the expense of others through the use of scarce resources. The refugee crisis is rooted in resources use. Our system is part of denying others resources, and so opportunities to have a good future, which is partly why refugees want to find a new life in Europe,” Wolfgang Teubner, Regional Director of ICLEI Europe told participants at the closing plenary of the 8th European Sustainable Cities & Towns conference in Bilbao, Basque Country.

The conference saw 1,000 participants discuss the major challenges facing Europe: the economic and financial crisis, the massive influx of refugees, and the rise of anti-European sentiment. One prominent conclusion was the need for greater participation from civil society in tackling these issues, ensuring that the people partner with local governments to exchange ideas and solutions. The only way forward, Mr. Teubner stated, is to build a more “inclusive and democratic Europe”.

“We need to shift from measuring economic output to social outcomes, such as health, happiness, and social inclusivity. We have to get away from an urban economy model based on privatisation and the selling of land. We need experts that do not see themselves solely as land managers, but rather people who manage a social and economic system that produces social benefits,” he added.

Mr. Teubner held up the Basque Country as a particularly good example of European integration, noting that it is has a strong identity and culture, yet it is integrated nationally and has a European and global perspective.

As urban centres are set to expand significantly in the coming decades, it is imperative that cities become more sustainable and resilient, leading the way in reducing carbon emissions and embracing the circular economy. Mayors, representatives from international institutions, and business leaders shared their perspectives in transforming towards sustainability and resilience, providing an inspiring look at the future of Europe.

Thomas Kastrup-Larsen, Mayor of Aalborg (Denmark), praised the Basque Country for taking up a leadership role on local sustainability, continuing a process started through the famous Aalborg Charter (1994) and Aalborg Commitments (2004). He praised the Basque Declaration, a major outcome of the conference and the successor to the Aalborg documents, saying: “The Basque Declaration provides a new pathway to sustainably transform our societies – all we have to do is walk it. We must and we will work together!”

Ana Oregi, Minister of Environment of the Basque Country, highlighted the importance of putting the declaration into action as well as the need for cities to cooperate as a network, noting that collectively "cities play a key role in the circular economy revolution".”.

Over 1,000 representatives from local and regional governments, European and international institutions, multilateral organisations, members of the research community, private sector and civil society are taking part in the 8th European Conference on Sustainable Cities & Towns, to exchange experiences and discuss ideas.

Following the UN Summit Meeting for adopting the Sustainable Development Goals and the COP21 Paris Climate Summit, this conference is the flagship event in Europe in 2016 for discussion and knowledge exchange on urban local sustainability.