Agreement signed by the Government of Minnesota and the Basque Government 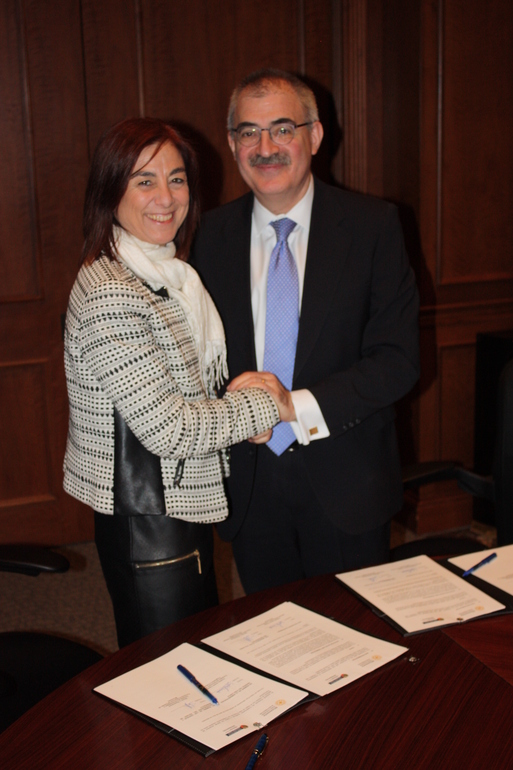 That Basque Government and the Government of Minnesota have signed an agreement in Minneapolis that consolidates the collaboration between both administrations to give impetus to Vocational Training. The Basque Government’s Minister for Education, Linguistic Policy and Culture, Cristina Uriarte, and the Chancellor for State Colleges and Universities, Steven Rosenstone, have thus shown their desire to delve further in the common work undertaken so far and which began in mid-2014.

During the meeting, the State of Minnesota’s head of higher education highlighted the good working relationship between both governments. Schemes have been set up and exchanges taken place since the initial contacts regarding Vocational Training began, the outcome of the meeting held during the II International VT Conference  in Donostia-San Sebastián.

The Chancellor stressed the gravitas of and the potential that he believes Basque Vocational Training offers, and the great support that it provides to consolidate and progress in their field of Vocational Training. He discovered that for himself during his official visit to the Basque Country in June 2015.  Rosenstone pointed out "it is strategic for us to continue to give impetus to Vocational Training, as it is essential for our economic and industrial fabric. This agreement will strengthen the economies both of Minnesota and of the Basque Country by fostering good practices in research, innovation and training. It will promote training and apprenticeship to prepare students to address the needs of companies and industry, along with driving collaborative education and research activities". Rosenstone also expressed his hope that the ties forged with the Basque Government may also spread to the university world, which is the reason for the different meetings that are going to be held during the coming week.

In turn, Minister Cristina Uriarte, after thanking the Government of Minnesota for its cooperation, stressed she was convinced that the agreed schemes, and those that could emerge in the future, will be of great importance to boost Vocational Training. As Uriarte pointed out, “advanced manufacturing, training students in new systems for 4.o industry and manufacturing are a priority for both governments, and both governments will benefit from the pooling of knowledge, experience and shared challenges. New times require new initiatives and new alliances. In Minnesota, we have found a State with the same objectives and similar training and organisation characteristics. I am convinced that both governments are going to harness the full potential of the agreement".

The Minister also expressed her hope that a line of work leading to an interrelationship between both university systems could be established. During the first hours of her visit to Minnesota, the Minister for Education, Linguistic Policy and Culture discovered in situ the characteristics of the State's universities from  the St.  Cloud State University officials, as they showed her around the campus.  She also had the opportunity to explain to them the potential of the Basque University System. During her stay in Minneapolis, the Minister will likewise meet with Metropolitan State University officials.

After Chancellor Rosenstone’s visit to the Basque Country last summer, the collaborations between both vocational training systems have got underway. Basque Vocational Training lecturers have visited Minnesota centres to discover different aspects of their training, organisation and relationship with the companies in different sectors. US academic staff have also visited the Basque Country with the same goal: to learn about experiences that they can implement in their training processes.

Collaborative work is likewise one of the main values of the agreement signed between the governments of the Basque Country and of Minnesota. Thus, seven lines of work have been set up in recent months, including the intention to delve further in different fields, such as Topological Optimization or manufacturing using 3D printers. The preliminary contacts have also taken place for:

After the signing, both governments expressed their satisfaction with the agreement reached and with the new collaboration channels that it offers to different higher education sectors with better people preparation and driving the industry of the future.