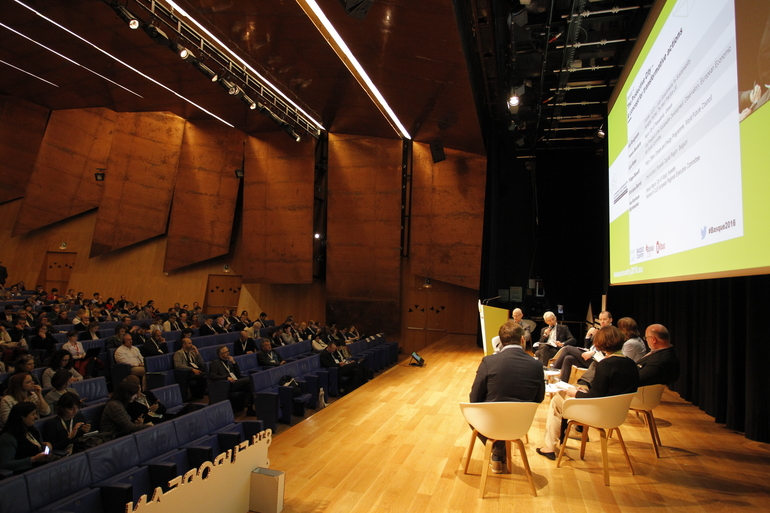 Through forming partnerships across different sectors of society, cities can transform themselves from being output based to outcome based, greatly improving their productivity and becoming even more valuable as centres of economic growth, said Jeb Brugmann, founder of ICLEI and Managing Partner of the Next Practice Ltd., speaking at the 8th European Sustainable Cities and Towns conference in Bilbao, Basque Country.

“The primary challenge of the next 30 years is providing an orderly conversion of land to accommodate 2.5 billion more people. This will require investing 350 trillion dollars - seven times the current global GDP. If we can get experts out of their silos and to understand the broad scope of what needs to be done, we can create cities that are multifunctional areas that have the capacity to address their own needs,” Mr. Brugmann told a plenary session of around 800 participants.

Mr. Brugmann made the point that all of our cities are underdeveloped and we can vastly increase their value by moving towards cities with a variety of functions, including more engaged communities operating with circular economy principles in mind. To achieve this, cities must merge innovations and scale them up through new development partnerships. “We are the regulators and managers of one of the largest stocks of assets in the economy – our cities,” he added.

The role of a city’s building stock in adding value was outlined, with the example given of private developers embracing sustainable innovations within new building projects as a way of significantly driving up the value of a city’s assets. This harmony between the public and the private sectors, with innovations and holistic input integrated into all processes, is at the core of the productive city.

Over 800 representatives from local and regional governments, European and international institutions, multilateral organisations, members of the research community, private sector and civil society are taking part in the 8th European Conference on Sustainable Cities & Towns, to exchange experiences and discuss ideas.

Following the UN Summit Meeting for adopting the Sustainable Development Goals and the COP21 Paris Climate Summit, this conference is the flagship event in Europe in 2016 for discussion and knowledge exchange on urban local sustainability.