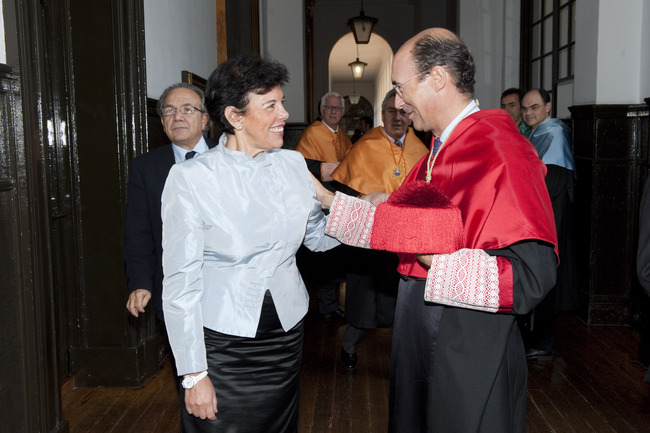 The Lehendakari is convinced that "only the talent of the best of our young people, afforded a good education, can spearhead the social, economic and business change that our society requires."

The Lehendakari, Patxi López, pledges his commitment to situate Basque Universities as "the great social reference point within the Basque Country, as the spearhead of the Metropolis of Talent that we hope to become." The Lehendakari delivered these words during the ceremony to inaugurate the academic year in the University of Deusto.

During his address, the Lehendakari insisted in the "decisive importance" that the Basque Government places on the promotion of higher education and research. Indeed, the Lehendakari is convinced that "only the talent of the best of our young people, afforded a good education, can spearhead the social, economic and business change that our society requires." Furthermore, he went on to state that the University must resolutely "support its research groups, create new research groups and significantly increase its scientific production."

The Lehendakari has affirmed that Universities are "fundamental elements" within the Basque system for science, technology and research. According to the Lehendakari, these areas "will enable us to overcome the current crisis, properly prepared for a prosperous, fair and sustainable future."

In addition to the Lehendakari, the inauguration ceremony in the University of Deusto was attended by the Basque Minister for Education, Universities and Research, Isabel Celaá, the Vice-chancellor of the University of Deusto and the Vice-chancellor of the UPV, Jaime Oraá and Iñaki Goirizelaia, respectively, and the Bishop of Bilbao, Mario Iceta, amongst others.

The Basque Minister Isabel Celaá affirmed that "the fundamental challenge toadvancement within prosperous, fair and sustainable societies centres around knowledge, both in terms of its generation and its innovative capacity."