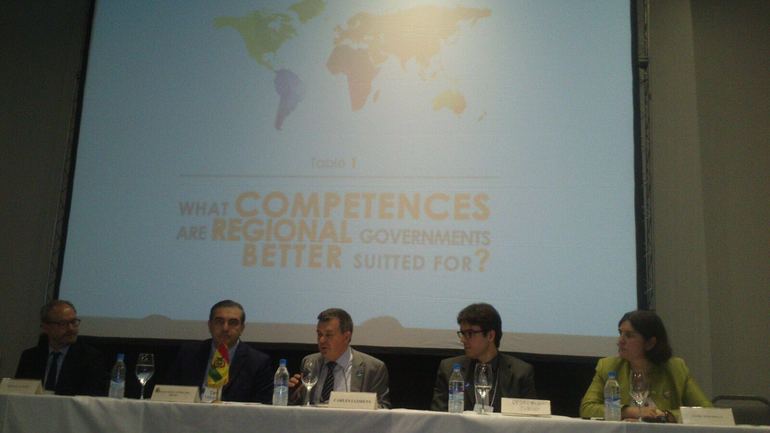 The Basque Government, represented by the Director for External Relations, Leyre Madariaga, and the Basque Government Delegate in Argentina-Mercosur, Sara Pagola,   took part in the VII World Summit of Regional Governments held in Rio de Janeiro (Brazil) this Thursday and Friday.  This event, led by the United Regions Organisation – ORU Fogar, was entitled "Regional governments, how can we become more effective?" The speeches by the Basque Government defended the differential value that the Basque Country provides in the international arena and its self-government model. During this international summit, the Basque Government also picked up two awards in the I Regional Best Practices Award, organised jointly by the ORU/FOGAR Network and the United Nations Development Programme (UNDP)  for the “Citizen Participation White Paper” and for the Child Development Monitoring Protocol in Schools.

After the meeting of the ORU Fogar General Assembly held yesterday, when the Basque Country was ratified for the first time to hold one of the two Vice-Presidencies, the VII World Summit of Regional Governments got underway. The summit sought to be an advocacy platform to speak up against the re-centralising trends emerging out of the economic crisis.  Regional leaders from the five continents, including over 35 Governors, attended the Assembly, a year and a half after the VI ORU Summit was held in Cartagena de Indias, Colombia (September of 2014).

Leaders of sub-state governments in Europe, Africa and America shared the changes that have occurred to their territorial models since the start of the economic crisis and how they can deal with them by seeking governmental effectiveness and excellence.  The Director for External Relations, Leyre Madariaga, took part in the roundtable where she argued that sub-state governments must be equipped with the necessary competences to make them more effective in the eyes of the general public.

The programme included the Regional Best Practices Award ceremony, a contest organised by ORU Fogar and the United Nations Development Programme (UNDP). The Basque Government was awarded in this category for its “White Paper on Democracy and Citizen Participation for the Basque Country”. This text was conceived as a tool to create permanent mechanisms ensuring dialogue, negotiation and agreement between the Basque Public Administrations and the citizens so that the latter can take part in the decisions affecting them directly. This document seeks to progress in the Basque Government's commitment to the new governance values: transparency, participation in decision making, active publicity, accountability, etc.

It also received an award for the  “Child Development Monitoring Protocol in Schools”, which aims to .foster child development, aimed at all children in school in the classes for 2, 3, 4 and 5 years old. This protocol is aimed at the early detection and intervention of the development difficulties that can be seen among the pupils, within the same context of the classroom. Therefore, it is necessary to train teachers for those children, an aspect that is particularly stressed in the Early Care Model for the Basque Country.

The United Regions Organisation / Forum of Global Associations of Regions (ORU Fogar) brings together regions from all over the world and being their voice before the international organisations, promoting a global policy of balanced development and territorial cohesion. Its main objective is to seek the intermediate governments’ recognition as major players in global governance.  It advocates that the decentralization of the national states' power towards other actors accelerates development and, consequently, it fosters democracy by the proximity between these new players and the citizens. ORU Fogar promotes a model based on strong regional government, with capabilities and legally recognised powers and budgets. The organisation has regional governments and regional networks from all five continents as members.