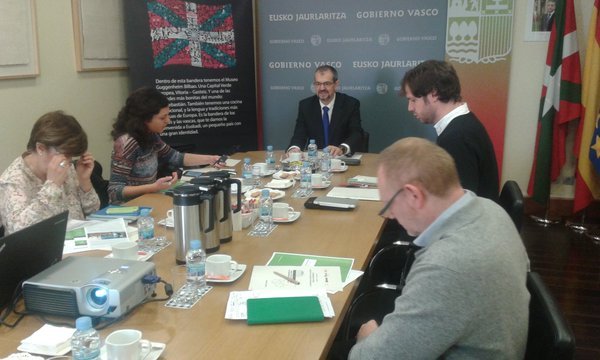 Between 27 and 29 April 2016, the Basque Country will become the European capital of sustainability, as it is hosting the 8th European Conference on Sustainable Cities & Towns with the slogan “Transformative Active:the potential for Europe”.  The conference is considered to be the most important event in 2016 in the field of urban and local sustainability policies.

After the COP21 World Climate Summit that was held in Paris last December, the 8th European Conference on Sustainable Cities & Towns will be a milestone on the international public agenda to discuss and analyse the way to transfer the outcomes obtained at the international climate meeting to the local sphere.

“Along with responding to global challenges, regional and local governments must face the social, financial and environmental problems in Europe. This conference will be a wake-up call to face those challenges and tackle them by transforming actions, as reflected by the slogan," pointed out Ana Oregi, the Basque Government's Minister for the Environment and Territorial Policy, after the Basque Country’s candidate was selected to organise the Conference in the region.

During the presentation of the Conference in Madrid today, Javier Agirre, the Ihobe General Manager, the publicly-owned environmental management company of the Basque Government, pointed out that  “the goals of the Conference include being able to provide local leaders with a platform on which to express ideas, experiences and expectations as regards sustainable urban development; to analyse the key role of cooperation between the local governments, the private sector, civil society and the financial sector in order to implement integral actions.”  The event will also showcase international and European policy tools related to sustainable development, such as the Sustainable Development Goals or the Urban Agenda of the European Union and explore how these tools can support and foster local initiatives.

During a recent visit to Bilbao, the ICLEI Deputy Regional Director for Europe, Stefan Kuhn, stressed that one of the main objectives of hosting the European conference in the Basque Country is to generate a meeting ground for stakeholders working at different points of the continent so that they can compare their experiences. “We need knowledge sharing at all levels, to see what is being done elsewhere and how problems are being solved, and then we can tell everyone in Europe:   this is how we have to act”.

Over 1000 representatives of regional governments, international and European institutions, multilateral entities, members of the research community, private sector and civil society are expected to attend this event to share experiences and discuss topics such as local governance, urban potential, the innovation market or the relevance of productive cities in Europe.

The organisers have opted to foster the participation of all sectors of society and have therefore placed importance on including private and public stakeholders in the event.  A cooperation network has thus been set up and involving different organisations, including Iberdrola, Tecnalia- the technology centre, the Basque Energy Board-EVE, SPRI – the Basque publicly-owned industrial promotion company, EuskoTren – the transport operator, and Irizar – the company designing and manufacturing coaches.

Basque Network of Municipalities for Sustainability

This conference will be the main continental event to discuss and share experiences on local sustainability and it therefore has the special backing of Udalsarea 21 – Basque Network of Municipalities for Sustainability. The way of working of that municipal network played a key role in the choice of the Basque Country to host the Conference.

All the information on the 8th European Conference on Sustainable Towns & Cities is available on the official website of the conference www.basquecountry2016.eu and in the official Twitter account @sustain_cities with the hashtag #Basque2016.