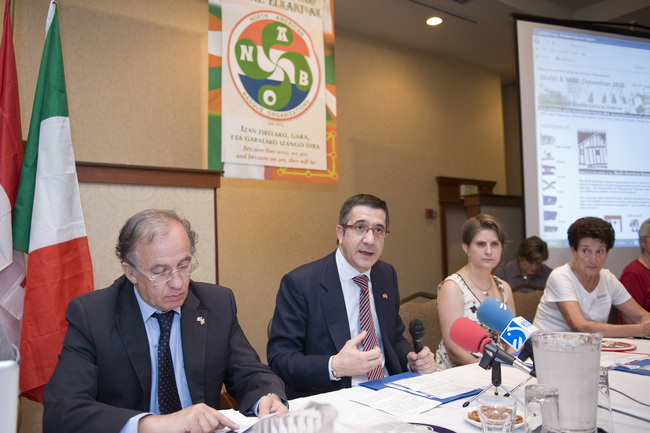 The Etxepare Institute is set to implement a new program to promote the dissemination of the Basque language with the aim of training Basque American citizens as Basque teachers. This initiative, promoted by the Basque Government, attempts to "strengthen the bonds" with the North American Basque community and "spread the Basque language throughout this land." The Lehendakari, Patxi López, made this announcement during the Assembly of The North American Basque Organizations (NABO) celebrated in Boise (Idaho).

The Assembly of the North American Basque Organizations (NABO) meets every five years in Boise (Idaho), coinciding with the celebration of the Jaialdi. On this occasion, the Lehendakari, Patxi López, was charged with the task of inaugurating the events of the day, in an act that was also attended by the Basque Minister for Culture, Blanca Urgell, the Director of the Etxepare Institute, Aizpea Goenaga, and the General Secretary for Overseas Action, Guillermo Echenique.

The program to promote the Basque language amongst American Basques has commenced with the selection of an initial group of fifteen people from U.S. states and Canada, who will begin the process of training to become Basque teachers in the near future. Via this program, the Lehendakari explained that the Executive hopes to "strengthen the bonds between us and spread the Basque language throughout this land." "This is a new program that will be overseen by the recently created Etxepare Institute and we are certain that it will be very warmly received," predicted López, who went on to detail that the Basque Government will provide the financing and technical resources required to implement the program, "and you, the people," he stated, alluding to the members of the euskal exteak present in the NABO Assembly, "are the emissaries of the voice that we bring from the Basque Country and which we hope will become louder and be heard in points that are increasingly further away," he added.

During his intervention, López wished to recognize the efforts of the Basque diaspora in the U.S.A. in keeping the Basque identity alive on North American soil, a feat that, according to the Lehendakari, affords them the position of being "a vital reference point for the Basque community." "You are the nexus between the Basques in the various North American states and between the Basques from different eras," he stated. The Lehendakari has expressed his hope that future generations will "continue to keep this flame alive." "Keep a tight hold of this link, because it will consolidate a success," he concluded.