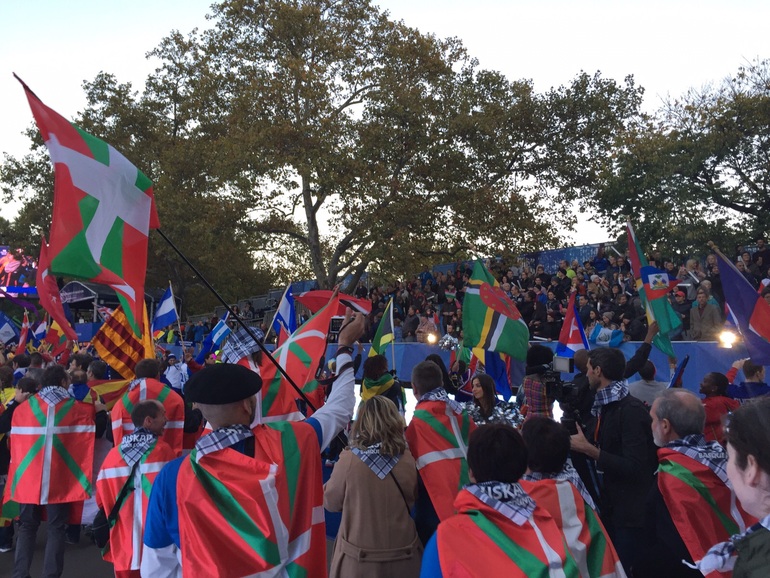 Basque Athletes arrived in NYC marched representing Euskadi-Basque Country in the Parade of the Nations at the NYC Marathon 2015 Opening Ceremony which took place at the iconic Central Park NYC last night.

Over 20 people gathered for the parade wearing the official Euskadi-Basque Country t-shirt and neck-scarfs and raising the Ikurriñas before hundreds cheering up from the stands and among many other Nations of Europe such as Norway, Scotland, Catalunya or Switzerland.

The Basque runners were accompanied by the Delegate of the Basque Country, Ander Caballero, and his staff. Caballero proudly declared “an honor and quite a milestone to see Euskadi represented as a Nation of Europe at one of the most important competitions in the world in the world by such a competitive and enthusiastic group of athletes.”

Runners, including Iñigo Uria, from Bilbao, who will run his “first marathon this being the NYC Marathon” and who’s travelling with his wife and his seven year-old daughter are “extremely happy to represent Euskadi and to have the chance to meet other Basque runners.”

The welcome to the Basque delegation participating at the NYC Marathon 2015 will also include a morning reception where all runners and their companions will receive t-shirts, scarfs and Ikurriñas in order to support the athletes and promote Euskadi-Basque Country throughout the streets of New York City.

The project is collaboration for the second time between the Delegation of Euskadi in the United States, the Directorate of Youth and Sports at the Basque Government and the Basque Federation of Athletics.