Icons of Memory: The Work of Miguel Marina, Basque Painter 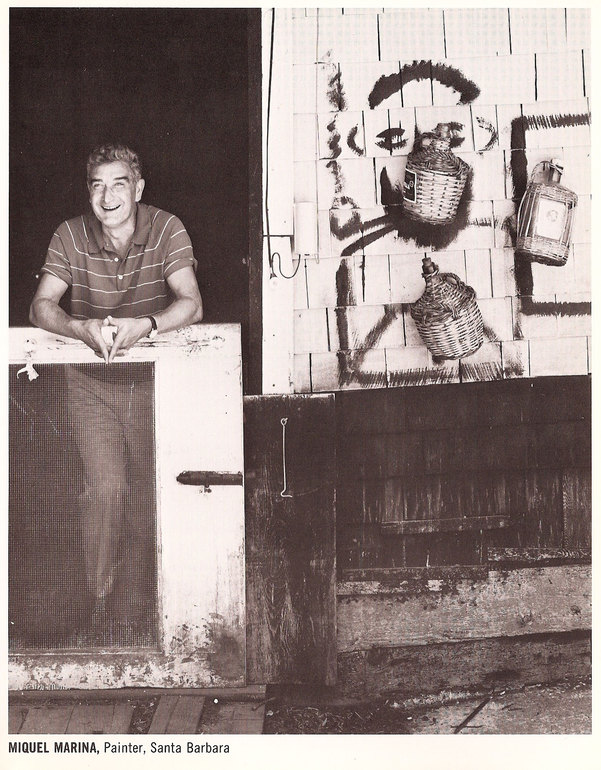 Opening of the exhibition "Icons of Memory: The Work of Miguel Marina, Basque Painter" on October 21st. at 7:30 p.m., in Bilbao (at the Lawyers Guild of the Dominion of Bizkaia - located at Rampas de Uribirtarte Street, 3). And before that, at 5:30 p.m., a panel session moderated by Asier Vallejo (Director of the Office for the Basque Community Abroad, at the Basque Government) and with the following participants: Noemí de Haro García (Autonomous University of Madrid); and Anthony L. Geist (University of Washington).

Miguel Marina Barredo’s life (1915-1989) reads like something out of an adventure novel. Born in Bilbao in the heart of the Spanish Basque Country, Marina was commissioned as a captain in the Republican infantry at the outbreak of the Civil War. He fought throughout the northern front before taking refuge in France at the end of the war. He crossed the Atlantic on a small boat with six others, landing in Venezuela, where he stayed for a year, earning his living as a professional soccer player. Under constant surveillance as a “dangerous radical,” Marina and a friend set sail for Miami, only to be blown off course by a hurricane and stranded in the Dominican Republic, where he lived under the Trujillo dictatorship for three years. To escape the island he took a job as a stoker on a Yugoslavian merchant vessel, finally jumping ship in New York. There he met his wife, Madeline, and their daughter Constance was born two years later.

It was in New York that Marina began painting seriously, first apprenticing with the Spanish painter Julio de Diego and later working as fellow exile José Vela Zanetti’s assistant on the massive UN mural, "Mankind’s Struggle for a Lasting Peace". Undocumented and unable to make a living in New York, Marina accepted a position as manager of a banana plantation in Ecuador, realizing soon after arriving that he had been lied to. Madeline and Constance were able to return to the States but he was not. He made his way overland to Mexico and recalled, just after crossing from Guatemala, coming upon a rural tavern called "Aquí mueren los valientes" (The brave die here). He thought, “My God, have I come all this way to end like this?”

Stranded in Me xico, having wound up in jail in Tijuana for lack of papers, his wife and child in the US, he decided that the only way they could be together was in Spain. But the Bilbao of 1956 was not the city he had known twenty years before and he knew they had to leave. Madeline and Constance were able to return to New York, but it took Marina two more years to get a visa. In 1958 they resettled in California, and when Madeline got a job the next year at the Center for the Study of Democratic Institutions, in Montecito, Miguel finally was able to devote himself full time to his painting.

Marina was largely self-taught as a painter. He painted on wood, bricks and less commonly on canvas. While we can distinguish provisionally three distinct periods in his painting all share certain characteristics: the use of strong primary colors reminiscent of Gothic stained glass windows; the human figures are elongated, particularly their faces and hands, and evoke both Byzantine and Romanesque figures as they directly face the viewer; religious themes, particularly the Crucifixion, the Annunciation, and the Last Supper; recreations of the landscape of his native Basque Country, increasingly present in his later paintings; and a lyricism and deep emotion that runs throughout. Marina had a number of individual exhibits at the Esther Baer Gallery in Santa Barbara, but when the owner retired in 1977, closing her gallery, from then until his death in 1989 he would never have another show. Yet it is in this final period that he creates some of his finest paintings. Marina’s work in the last decade of his life grows more intensely personal and lyrical, recreating images of the Basque Country.

He abandons religious themes, exploring instead his icons of memory: fishing boats, dishes of codfish, men wearing Basque berets, wine vessels, bridges and red tiled roofs. In one of his last diary entries Marina wrote: "I remember Spain more and more at each turn and at the same time I want to forget it. I’ve lived more than 40 years with a foot in each Ocean, yet my memory always returns to the gentle, green mountains of the Basque Country and to the songs of the Ochote bilbaíno, to the festival of St. Agatha, where I sang solo in my baritone voice, in the streets of Bilbao, full of children who followed us every where. I’ll soon be 74 years old and I’ll never return to my beloved Basque Country; for this reason my paintings, like a giant mirage, are memories of my beloved land”.