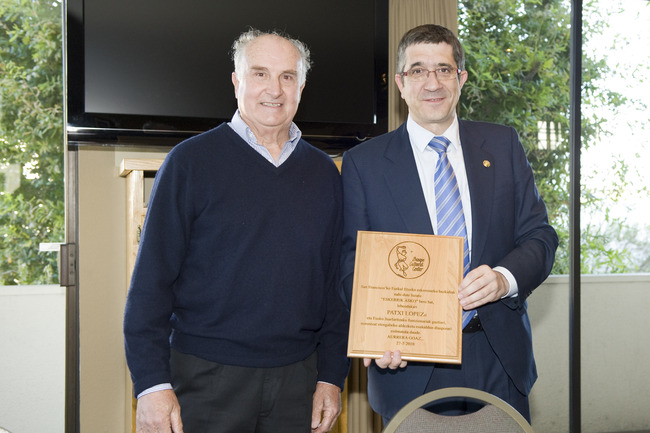 The third stage of the visit to the U.S.A. has served to enable the Lehendakari to celebrate a meeting with members of San Francisco's Euskal Etxea and businessmen and businesswomen from California.

This afternoon, San Francisco's Euskal Etxea received the Lehendakari, Patxi López, who maintained a very friendly meeting with the Board of Directors of South San Francisco's Basque Cultural Center. The Lehendakari then went on to participate in a reception, which was attended by Basque businessmen and businesswomen from California. Addressing this audience, López insisted that, in addition to keeping their pride in being Basques alive, they join forces "on either side of the Atlantic" to enable Basque companies to establish themselves in the U.S. and ensure that the Basque Country "continues to grow." To this end, López announced that the Basque Government will "resolutely support" the possibility of integrating CAF within the North American trade-show model. "The United States, in general, and California, in particular, represents a priority space for the development of those areas where Basques excel, in order to connect with the Metropoli of talent, a definition that we hope to apply to the Basque Country in the future," he pointed out.

The third day of the official visit of the Lehendakari, Patxi López, concluded with a visit to San Francisco's Euskal Etxea. Here, he maintained a friendly meeting with the Board of Directors of South San Francisco's Basque Cultural Center and with Basque businessmen and businesswomen from California. López encouraged American Basques to keep alive their pride in being Basques and to "maintain their roots", whilst urging them to construct "bridges" that will enable Basque companies to enter the North American market. To this end, the Lehendakari ratified the policy of the Basque Government for the establishment of companies such as CAF, taking advantage of the "opportunity" presented by the trade-show model issued by the Obama administration. "The United States, in general, and California, in particular, represents a priority space for the development of those areas where Basques excel, in order to connect with the Metropoli of talent, a definition that we hope to apply to the Basque Country in the future," he pointed out.

The meeting with the Board of Directors of South Francisco's Basque Cultural Center was attended by the President of the SFBCC, Philippe Acheritogaray, the President of NABO, Valerie Arreche and Xabier Berrueta, member of the Advisory Council for Basque Collectives. In addition to the Lehendakari, Patxi López, the Basque Government was represented by the General Secretary for Overseas Action, Gullermo Echenique, and Juan Goikolea, Basque Vice-Minister for Innovation and Technology.

The act began with a Basque dancing exhibition, subsequent to which the Lehendakari took the floor in order to explain the current economic situation of the Basque Country and the importance of the mission he is currently spearheading in North America. For López, the U.S.A. is "an unavoidable reference point for the development of strategic alliances within our business, university and technological system," to which end he has striven to improve relations "on either side of the Atlantic." The Lehendakari has encouraged American Basques to construct "bridges to enable relations between a territory that, more than any other, combines its past with economic and business vigor in the most advanced production sectors and the great country of the United States."

The Lehendakari, who was accompanied by 10 Basque companies inscribed in GAIA, The Association of Industries for Electronic and Information Technologies in the Basque country, has stressed the "excellent position" of the Basque Country, "boasting the appropriate infrastructures and relations to enable such a small territory to serve as a point of entry, a gateway to the many other European regions with which we maintain close and fluid relations," he stated.

At the end of his intervention, the Lehendakari has affirmed that without the Basques in the U.S.A. "it would be impossible to understand the Basque Country" and we would lose "a part of ourselves."