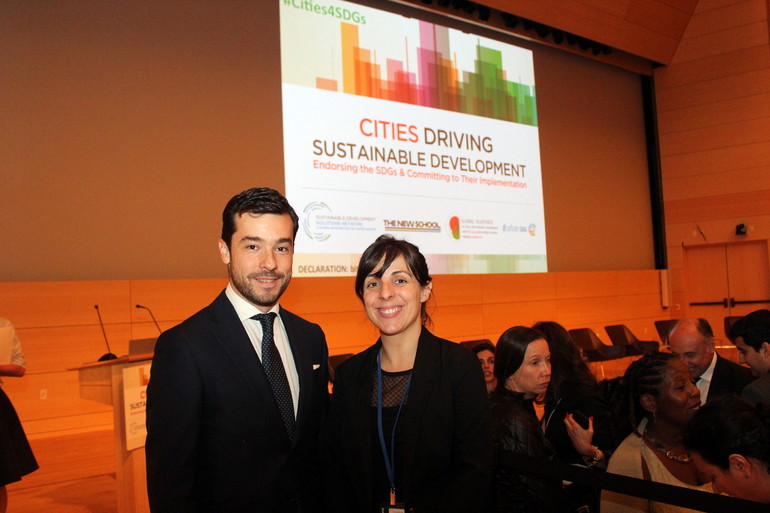 Download photo
Embed image
Download photo set (zip)
The Basque Country shares at the United Nations Climate Week its knowledge of environmental development and the importance of education in guaranteeing sustainability of the planet Source: Irekia

This morning, the Basque Government delegate in New York, Ander Caballero, presented, at the Climate Week and Sustainable Development Summit organised by the United Nations, in the framework of the nrg4SD Network of Regional Governments for Sustainable Development, the framework environmental programme developed in the Basque Country, highlighting, among the different lines of action, “the importance of education as one of the tools for generating positive social changes to improve the planet”.

Also expected to intervene in the New York summit is Pope Francis, whose commitment to conservation of the Planet was highlighted in Vitoria-Gasteiz by the Basque Government Minister for the Environment and Regional Policy, Ana Oregi, “for his common sense, innovation and commitment to achieving a better world in which all people can enjoy opportunities”.

Mirroring the other representatives of regions and countries and their examples, the Basque Government delegate explained the working agenda underway in the Autonomous Community within the Framework Environmental Programme 2020 as an Administration committed to the Environment, a healthy territory, a permanent ecological attitude, environment-friendly production and manufacturing processes, healthy eating and green infrastructures.

“Synergies and their ‘snowball effect’ are used in the Basque Country for the purposes of learning and knowledge transfer between different groups of interest, in the framework of public innovation and cooperation. Depending on their objectives, our Basque Government projects are open to the participation of Regional Councils, City Councils and other institutions, in addition to public-private collaboration” Basque delegate Ander Caballero explained to the European and American representatives gathered at the New York forum.

Also at the Climate Week organised by the United Nations is the Director of Unesco Etxea, Arantza Acha, participating the debate on adopting the sustainable development agenda, who stressed that “today 193 world leaders will adopt the new world development agenda under which they undertake to eradicate poverty, combat inequalities and protect the planet”.

“This ambitious agenda – added the Director of Unesco Etxea – represents a landmark in international discussions, placing sustainability and people at the core of development and establishing a series of objectives common to all societies in the world. UNESCO Etxea participates in this special UN Summit at which this agenda has been adopted, working to highlight and strengthen the part to be played by both civil society and the regions in achieving inclusive and just sustainable development”.