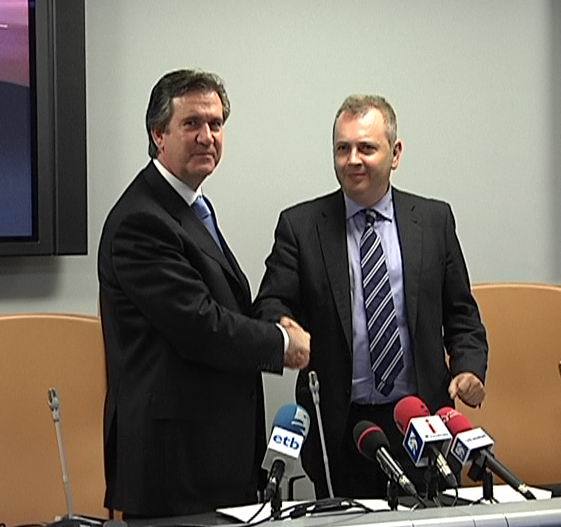 This year, the Department for Industry, Innovation, Trade and Tourism has provided EITB with funding of 964,000 euros for various projects.

Regional minister Bernabé Unda signed an agreement with Alberto Surio that encapsulates all joint initiatives implemented this year: the updating and renewal of the Tourism web page, the Teknopolis program.

Basque tourism will soon boast its own Internet-based television channel. The channel will include content in various languages and will commence broadcasting in August. The project forms a part of the agreement, which was signed today, between the Minister for Industry, Innovation, Trade and Tourism, Bernabé Unda, and the general manager of Euskal Irrati Telebista (EITB), Aberto Surio.

In this manner, the Department and EITB have sought to consolidate their relationship and formalise their commitment in various areas, such as the dissemination of the industrial, commercial, touristic and innovative activities carried out in the Basque Country.

The agreements between the Department and EITB take in various activities, which include the following: the updating and renewal of the Basque Country's Tourism web page, the implementation of the recently created Euskadi TV, subsidies for the production of the Teknopolis program, which focuses on scientific and technological dissemination, etcetera. As a collective whole, these activities entail the provision of funding from the Department for Industry, Innovation, Trade and Tourism amounting to 964,000 euros.

Both the Basque Government and EITB have undertaken the task of searching for formulae to transmit the image of the Basque country and its tourism brand to overseas audiences. Within this framework, an inventive new project has been drawn up: TV Euskadi is an innovative initiative, closely connected to the advancement of new technologies employed by the Department to promote tourism in the Basque Country, amongst other objectives.

The new channel includes videos relating to tourism in the Basque Country, released in several languages. Audiovisual material will provide information on the various products available to visitors (gastronomy and oenology, tourist routes, conference tourism, urban breaks...) and will include content relating to the weather and the cultural program, promotional videos and reports on various activities that are of interest to tourists along with information on current events. In August, one of the first broadcasts will entail the transmission of the fiestas of the three Basque capitals, images that can be viewed from any part of the world.

In a similar vein, the Department and EITB are working intensely to renew and modernise the Basque Country's Tourism web page. New content will be introduced in an attempt to present a page that proves more attractive to tourists visiting the region. The objective involves setting up a portal that is more innovative and easier to surf, which will be complemented by the new television channel.

Another agreement between the Department and EITB involves the dissemination of scientific and innovative activities occurring within the Basque Country. To this end, the Basque Government continues to sponsor the Teknopolis program, produced by Fundación Elhuyar, which, over the course of its 36 yearly transmissions attempts to stimulate interest in areas connected to technology. The program has been broadcasting for 12 years and has received awards with both national and international prestige on 6 occasions