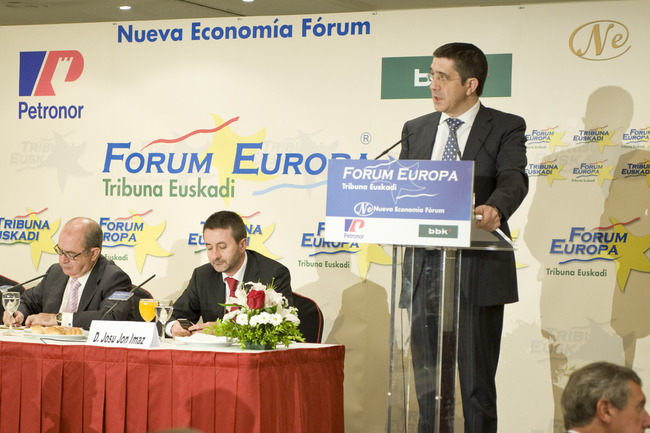 Mr López commended the "PNV's involvement in the governability of Spain's institutions", but criticised "the arrogance" of a number of PNV representatives when referring to these conversations.

The Lehendakari gave a talk this morning in Hotel Ercilla in Bilbao during a seminar organised by Nueva Economía Fórum.

During his talk, Mr López summarised his government's strategic objectives in these words: "we want a Basque Country of free citizens, demonstrating solidarity, sustainability and competitiveness."

Patxi López reminded the audience that "as a result of the network of motorways that have been built over the past thirty years, the considerable increase in the mobility of citizens and the imminent high-speed train network that will connect the three capital cities with one other, with Europe and with the rest of Spain, the Basque Country will bear a strong resemblance to a modern metropolis."

The President added that the Basque Country must take advantage of this and build a networked metropolis, a globally competitive metropolis of free and participative citizens, a metropolis grounded on shared human talent and social talent.

Mr López also emphasised that "the modern and competitive Basque Country of the twenty-first century must base its progress on knowledge and innovation." Thus, he pointed out the need for further and improved investment in research and innovation.

When addressing the subject of education, he said that it represents the cornerstone on which everything else must be built. He also added that the Basque education system had to be improved by enhancing quality and results and by modernising teaching methods.

The President also spoke on the productivity of Basque companies. He stated that in order to increase productivity it was necessary to enhance the competitiveness of companies and sectors. He explained that the 2010-2013 Competitiveness Plan would be presented shortly, a plan which will ensure that the Basque economy is capable of leading an open, innovative and sustainable development project.

Patxi López also spoke on the welfare state, stating that the demographic structure of Basque society may become a serious problem if it is not approached in a realistic manner. He added that it was necessary to reform and reorganise the pension system to guarantee its survival. He also spoke of the need for policies to boost the birth rate and support families, as well as the need to integrate immigrant workers.

The President was optimistic and drew attention to the fact that the Basque Country was emerging from the financial crisis, listing a number of indicators as evidence in this regard. He pointed out that unemployment figures had been decreasing for four consecutive months; the industrial sector continues to recover; growth in the tourism sector within the Basque Country had been spectacular and had exceeded historical highs; and tax revenues have increased by an average of over 15% compared to the previous year.

However, he stressed that there was still more to be done, stating that the Basque Country was in need of profound changes as the world, people, relations, opportunities and competition in the global market are changing. Furthermore, he said that everybody would have to work together to ensure progress.
Question Time

After his speech, the Lehendakari answered questions from the audience, formulated by the President of Nueva Economía Forum, José Luis Rodriguez.

When asked about the merging of the Basque savings banks, Mr López drew attention to the fact that the acquisition of CajaSur by BBK was positive as it would make BBK one of the best savings banks. He added that although the operation created an imbalance in the size of the three Basque savings banks, making the merger more difficult, it was not impossible. He stated that when the time came, when things were calmer and when the banks decided that the time was right, the merger could go ahead.

Regarding the PNV's negotiations with Mr Zapatero, Mr López said that he had always been in favour of the PNV's involvement in the governability of Spain and believed that it was positive. Despite this, he criticised the "arrogant statements" made by a number of PNV representatives when claiming that their party was going to negotiate with the central Government without the PSE. Mr López pointed out that both the PSE and the Basque Government were going to participate in the negotiation.

With regards to the alleged case of espionage involving politicians in Álava, he expressed his desire for the justice system to pursue the investigation "to the end" and stressed that the Basque Government would do everything it could to help clarify the occurrences.