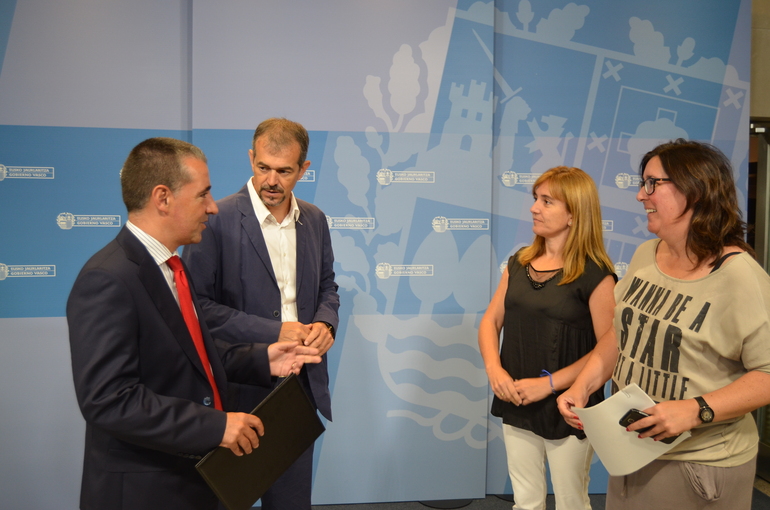 The Basque Government’s Ministry of the Environment and Territorial Policy will earmark €1,810,000 for local authorities that implement actions to foster sustainable development, pursuant to the order regulating the awarding of subsidies to local councils, supramunicipal associations, other local authorities, local autonomous bodies, local development agencies and local corporations.

“The financial support will be for projects started after 1 January 2015 and which embrace the priority lines of the Ministry of the Environment and Territorial Policy, in the environmental areas of contaminated land, climate change and atmosphere, natural capital and biodiversity, and, last but not least, education for sustainable development," explained Iosu Madariaga, the Deputy Minister for the Environment of the Basque Government.

As regards contaminated land, subsidies will be available for those research actions involving land that have been used for potentially polluting activities and actions to recover contaminated land, both in areas used for industrial activities and due to uncontrolled depositing of waste that ceased prior to 20 December 1994.  The maximum amount of the subsidy will be €60,000 for each research project and €20,000 for recovery projects. The maximum amount is €15,000 in the case of landfill environmental monitoring projects.

As far as climate change and atmosphere are concerned, improving the ambient air quality, in terms of the particulates (PM10, PM2.5) and nitrogen dioxide (NO2), preparing noise maps in municipalities with under 100,000 inhabitants – provided that they are approved prior to 31 December 2015, and noise mitigation projects can apply for funding. Subsidies will also be available for cutting net greenhouse gas emissions or preparing detailed studies for the future refurbishing of municipal buildings.

The maximum amount of the subsidy in this line is €80,000 for each project, with the following exceptions: the maximum amount for preparing plans and studies related to adapting to climate change is €15,000, while it is €10,00 for noise maps and €6,000 for detailed studies prior to refurbishing projects. In the case of vehicle-related projects, the maximum amount is €4,000 for a vehicle with a seating capacity of 10 and under and €20,000 for each larger vehicle.

In the sphere of education for sustainable development, subsidies will be available for actions that foster coordination between Local Agendas 21 and School Agendas 21 and which are implemented between 1 July 2015 and 15 July 2016.  The actions promoted have to include at least the organising of an inter-school forum and a municipal forum per academic year.  The subsidy in this section may not exceed 50% of the amount of the costs that can be subsidised, or €16,000 for each beneficiary entity.

Each entity may only received subsidies for a maximum of two projects that qualify overall for the contaminated land, climate change and atmosphere, and natural capital and biodiversity lines, as well as for a project in the education for sustainable development line.

The deadline for submitting applications is 15 September 2015. The applications must be submitted online at the electronic office of www.euskadi.eus (https://euskadi.eus/ayuda_subvencion /-/2015/herrijasangarriak/es/).

Economic and environmental impacts of the grants

The Ministry for the Environment and Territorial Policy have allocated financial support to the tune of €32.8 million to local councils and local authorities of the Basque Country over a five-year period (2007-2012).

“These grants, aimed a funding environmental improvement projects and those to foster sustainable development, have managed to mobilise nearly a further €84 million thanks to the contributions from the beneficiaries of the grants”, told Iosu Madarariaga, Deputy Minister of Environment.

From an environmental aspect, these grants have generated significant benefits. Specifically in the field of contaminated land, 252 hectares have been tested, over 17 hectares of sites have been recovered, which means that 524,900 m3 of soil has been recovered and 31% of the cases have ended with Soil Quality Declarations.

As regards biodiversity, over 748 hectares have been intervened, restored or created, 238 of which have included special protection status such as Natura Network, Biosphere Reserves or Natural Parks.

Action has been taken to eliminate invasive exotic species from over 354 hectares.

Over 10,000 Tn of CO2 will be absorbed over the coming 30 years thanks to reforestation projects as sinks.

The achievements in terms of the atmosphere include cutting emissions by over 15,000 Tn CO2 eq  and of  over 1,800 kg of PM10 particulates, and the construction of 100 km of cycle lanes.

As regards the School Agenda 21, 70 municipalities on average are coordinating with 334 educational centres involving an annual total of around 174,000 students in education for sustainability.

158 applications were received in response to the 2014 call for grants and 110 projects have consequently been subsidised, out of which:

Since the publication of the first subsidy order to help local councils and local authorities with environmental improvement, 1,063 projects have so far been subsidised to the tune of a total of €45.1 million.