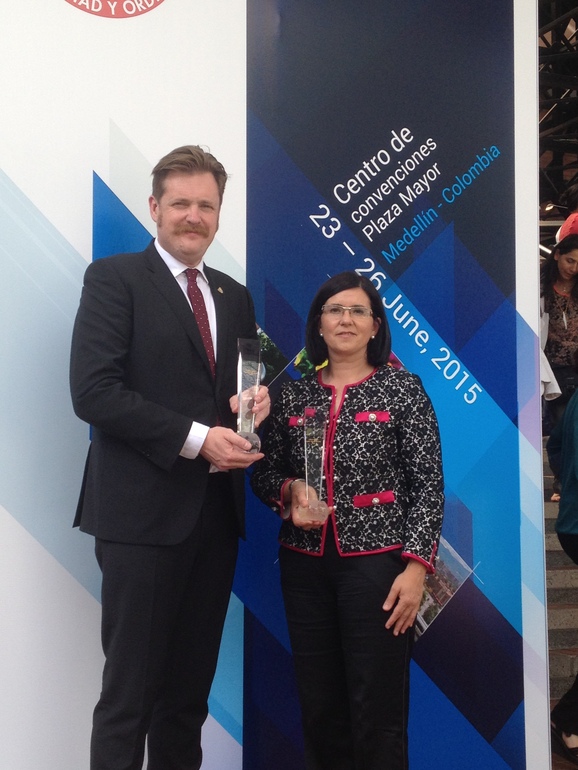 The EMAKUNDE director, Izaskun Landaida, and the Open Government Director, Luis Petrikorena, collected the United Nations Public Service Award – considered to be the most prestigious international recognition of excellence in public service – in two of its four categories. The award ceremony was held during the UN World Public Service Forum recently held in Medellín (Colombia) and which gathered together 1000 public representatives from around 100 countries around the world.

The Basque representatives were also named “the best ambassadors of their country” by the delegates at this world forum.  The event has been the opportunity to share experiences and best practices and facilitate cooperation channels to foster, through innovation, more effective, transparent and participatory public services that are focused on meeting the needs of women and men.

This year, the UN gave First Prize to Emakunde in the Promoting Gender Responsible Delivery of Public Servicesfor its excellence in the implementation of the Basque Gender Equality Act.

The Irekai portal was the prize winner in the Fostering Participation in Policy Making Decisions through Innovative Mechanisms category.  The Basque Open Government initiative (developed by IREKIA) was considered as one of the trail-blazers in this field in Europe.

Irekia and Emakunde have had the support of the Basque Government’s External Action Directorate, and of the Government’s delegations in the USA, Chile, Peru and Colombia.

The United Nations Public Services Awards have been held since 2003.  This year saw the largest number of nominations (848) and the most countries taking part (71).  In total, 22 public institutions from 18 countries received awards.

Information on the award.