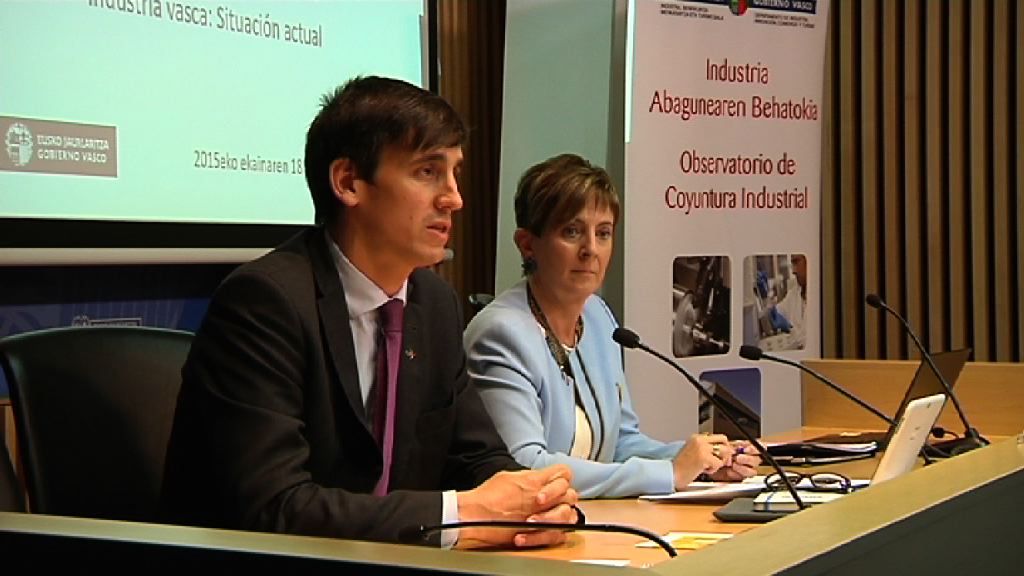 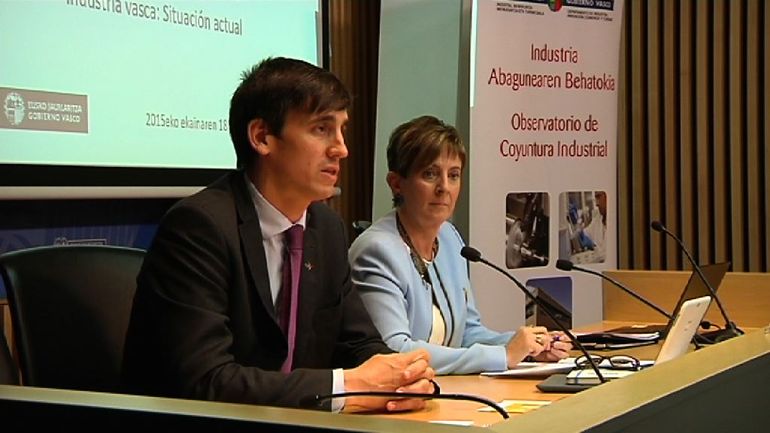 -        The Industrial Situation Observatory noted in its annual report that the forecasts point to improvements among the 21 associations and clusters of the Basque Country. The Basque Government’s Minister for Economic Development and Competitiveness, Arantxa Tapia, will chair the meeting of this forum on Thursday.

-        The report highlights the situation of sectors such as the aeronautics industry, whose turnover grew by 8.2% last year, and the automobile industry, which is forecasting growth of nearly 5% this year.

-        The Observatory reveals that the industrial climate in the Basque Country indicator improved substantially in April and went into positive figures (2.1 points), over zero for the first time since March 2008.

The Industrial Situation Observatory meets in Bilbao this Thursday.  The session will be chaired by the Basque Government’s Minister for Economic Development and Competitiveness, Arantxa Tapia, and will analyse the data and consider the future prospects.

The report highlighted the situation of sectors such as the aeronautics industry, whose turnover grew by 8.2% last year, and the automobile industry, which is forecasting growth of nearly 5% this year. The maritime industry, with a turnover of EUR 2,105 million in 2014, posted growth of 3% and the Habic cluster, with a turnover of EUR 1,180 million, expects to increase this revenue in 2015. Fifty-seven per cent of hand tool manufacturers expect more orders for halfway through this year, the household appliance sector posted growth of 7.8% and the order book for railway equipment was up by between 10% and 15% in the first quarter of this year. Even in clusters such as the audiovisual and construction ones, which have been heaviest hit by the economic crisis, are noting a slight upturn.

The Observatory reveals that the industrial climate in the Basque Country indicator improved substantially in April and posted a positive value (2.1 points), and over zero for the first time since March 2008.  Last year, exports posted EUR 22,244 million, up by 9.9% on 2013, which is an all-time record in the history of the Basque Country. The exporting behaviour (the weight of exports in the GDP, an indicator of the competitiveness of the Basque industry) rose from 31.2% in 2013 to 33.2% last year.

Aeronautics and space: The Hegan association, made up of a total of 38 companies that employed 4,278 workers in the Basque Country in 2014, invoiced a total of EUR 874 million last year. In the first quarter of the year, the turnover has already grown by 8.2% and employment increased by 4.4%. The outlook is good as the order books are now estimated to have orders for around 10 years.

Audiovisual: The figures for Eiken cluster are 30 companies and 4,735 jobs and a turnover of EUR 581 million in 2014.  After the significant weakening of the sector in previous year, signs of recovery were seen in some of the private companies that can act as drivers. After a 25% loss in employment since 2010, job figures are expected to remain steady this year.

Automobile: This cluster has over 290 companies and posted a turnover of EUR 13,700 million in 2014, which was an all-time record and up 5.1% on 2013.  The upward trend is expected to continue this year, with another rise of 4.7%. Last year, 1,200 jobs were created in the Basque Country due to the launch of new projects in the plants of the Basque Country and also to the growth of the Basque companies abroad.

Capital Goods and Energy: Made up of 350 companies employing 20,563 people and a turnover of EUR 49,533 million. There are differences by sectors: improvement in electricity and renewables thanks to the good performance of certain international markets and the drop in the Oil&Gas sector due to the drop in oil prices. Employment remained steady.

Biosciences: 51 companies, 1,448 jobs and a turnover of EUR 304 million in 2014.  The investment in R&D figures stood at EUR 35 million, there is an important emphasis on internationalisation, and turnover and exporting are expected to improve.

Construction: The Eraikune cluster is made up of 96 companies, providing 4,500 jobs, even though the sector as a whole has over 20,600 companies and employees 54,000 people. The turnover fell by 3.7% in 2014, which was the smallest shrinking of the sector since the start of the financial crisis. This trend is a slight improvement in the sector and job generation. One significant figure is that 86% of companies are made up of less than three workers.

Household appliances: 19 companies and a turnover of EUR 634 million in 2014.  The national market has started to show growth again after a seven year drop and the turnover rose by 7.8% last year. The upturn has allowed nearly 300 jobs to be created in recent months. Financing has begun to trickle in and the sector is expected to grow.

Electronics and telecommunications: 290 companies, 12,900 jobs and a turnover of EUR 3,000 million.  The turnover is expected to grow by 6% and employment to rise by around 4.3% this year.

Railway equipment: 24 companies and a turnover of EUR 1,750 million. The order book has grown by between 10% and 15% in the first quarter of this year, even though the turnover dropped slightly last year. However, employment rose by 5% last year. The sector is expected to grow at an annual rate of 2.7% over the coming six years.

Hand-tool manufacturers: 32 companies, 2,350 people employed and a turnover of EUR 374 million. Companies have noted an upturn since the last quarter of 2014 and 57% of companies expect more orders by halfway through this year. Last year, turnover grew by 4% and employment remained steady after the 35% drop between 2007 and 2012.

Forging: 20 companies, 1539 jobs and a turnover of EUR 326 million.  In the first quarter of this year, the delivers in tons fell although there was a raise in their value. The sector continues to flat line, but an improvement is forecast in the second half of the year.

Home and Contracting: The HABIC cluster is made up of 110 companies with 5,400 workers that have posted a turnover of EUR 1,180 million. This year's turnover is expected to improve and, as regards employment, people are being contracted for specific areas such as commercial-exporting. The situation has improved in terms of demand but there continues to be great pressure to drive prices down.

Agri-food industry: The Food cluster is made up of 60 companies, with 5,200 people employed and a turnover of EUR 1,520 million. The prices and the margins vary according to the sub-sector, which makes it hard to establish a common line.

Maritime industry: The Basque Maritime Forum is made up of 235 companies, accounting for 13,775 jobs and a turnover of EUR 2,105 million in 2014.  Employment in these companies has risen by 2% on the previous year and the turnover has also grown, by 3%, which seems to confirm the gradual recovery after the doubts about the new tax structure, the so-called Tax Lease, have been dissipated.

Language Industries: 377 companies and a turnover of EUR 51 million. The turnover is expected to grow by nearly 2% and employment to rise by 1.8% this year. It currently employs 5,159 people.

Machine Tools: the AFM cluster is made up of 154 companies, accounts for 7,300 jobs in the Basque Country and posted a turnover of EUR 1367 million in 2014.  Turnover is expected to remain study or grow slightly this year and employment will also remain at similar levels.

The Environment: The Aclima cluster is made up of 79 companies, with 4,150 people employed and a turnover of EUR 1,750 million. During the last half year, turnover improved and, after a negative trend over several years, employment is expected to improve slightly.

Paper: 20 companies in the cluster, 1862 workers and a turnover of EUR 846 million in 2014.  The turnover is shrinking due to low demand and employment rose in the last half year as paper machines shut down in 2011 and 2012 were brought back into operation.

Iron and Steel Products and Facilities: The Siderex cluster is made up of 69 companies, accounts for around 13,000 jobs and posted a turnover of EUR 5187 million in 2014.  Production grew by 7.6% last year and, after several years with company closures, employment remains stable. A slight improvement can be seen, but investments in improving equipment are not expected.

Transport, mobility and logistics: The mobility and logistics cluster is made up of 98 companies that invoiced a total of EUR 26,910 million in 2014. The cluster’s turnover grew by 30% in the last year and there was a slight rise of 0.3% in the sector. Employment rose by 11% and the atomization of the sector, with many companies with self-employed workers, should be noted.