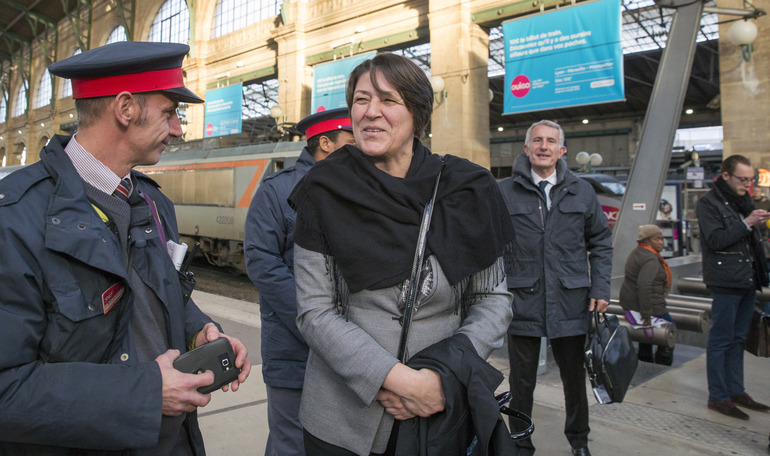 The Basque Minister for the Environment and Regional Policy, Ana Oregi, received with interest the confirmation issued today by Violeta Bulc, European Commissioner for Transport, ratifying connection of the French rail network to the Basque Y network within the scheduled time frame. The announcement represents positive news for the Basque railroad network shortly to start running and particularly for the part opening connections with the interior of Europe.

Following publication of a report entitled “Rapport et conclusions de la Commission d'enquête sur le Grand Projet ferroviaire du Sud-Ouest (GPSO)” which addressed several questions regarding the deadlines for completion of work to update the French Atlantic railroad network, the Lehendakari, Iñigo Urkullu, and the President of the Aquitaine Regional Council, Alain Rousset, stressed the priority nature of the Atlantic corridor as established by the European Commission. Both leaders recalled the need to update “the old railroad infrastructures still in use, adapting them to the needs of the inhabitants and productive sectors of the Basque Country-Aquitaine Euroregion”.

In her reply, publicly announced this morning, Commissioner Bulc refers to “three incontestable figures to allay concerns and confirm the desire of Paris to meet the deadlines: the projects presented by France to the last Connecting Europe (financial mechanism by means of which Brussels co-finances works included in the major European transport routes) call for proposals; the proposals made by the Dutch government in studies of “Le Grand Projet du Sud-Ouest” and several initiatives that affect the delivery deadlines of the Atlantic corridor.