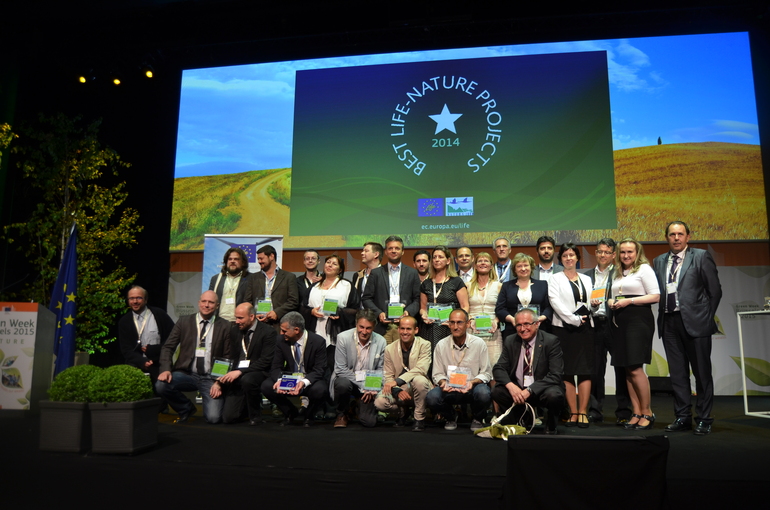 This afternoon in Brussels, Ana Oregi, Regional Minister of the Environment and Territorial Policy of the Basque Government, received the “Best of the Best LIFE Nature and Information Projects Award 2015”, launched by the European Commission to distinguish best environmental practices. The estuary recovery work by the Basque Government involving the eradication of the invasive plant Baccharis halimifolia in the Txingudi, Lea and Urdabai estuaries was the focus of the EU award. At the EU Green Week in Brussels, Oregi proposed that “the countries and regions of Europe step up the exchange of information and plan joint action against invasive species”.

Accompanied by Deputy Minister Josean Galera, Ana Oregi thanked the technicians and scientists for their work in removing more than 570,000 Baccharis halimifolia bushes over 780 hectares, and by doing so, bringing back the Basque estuaries to their original state and preserving their biodiversity.

Together with the Basque Government’s “Life-Estuaries” project, the other four winners of Europe’s Best of the Best initiatives included Conservation of the Imperial Eagle and the Saker Falcon in Bulgaria’s Red Natura 2000; Conservation of the Hungarian meadow viper; Best practices for the conservation of the Carpathian brown bear of Romania; and the Thalassa awareness raising project on endangered marine mammals in Greece.

“The problem with invasive plants affects the entire world due to natural causes but most particularly human movement. A similar thing is happening with a number of animal species,” said Oregi. “We need to use the right approach and take immediate action because these foreign species can reduce our natural plant and animal heritage.”

Accompanying Ana Oregi at the event, held in “The Egg” building, were Svetoslav Spasov from Bulgaria, Bálint Halpern from Hungary, Silviu Chiriac and Loa Mihai from Romania, and Nikolaos Labadariou from Greece.

Regional Minister Oregi encouraged the rest of the countries and regions of the European Union to “step up their cooperation and sharing of information in this area to design joint projects since invasive plants affect us all and know no geographic boundaries.”

“The problem of invasive species multiplies on a daily basis,” added Ana Oregi. “In Euskadi the invasive plants we see are Baccharis halimifolia, pampas grass and other species previously unknown in this area. Much the same is happening with the American ruddy duck and the American mink. Even the capybaras has been detected in Txingudi. The Asian predatory wasp is killing off the native bees, which is a serious matter since without bees pollination is insufficient and the ecosystem is altered. Temperature changes brought about by climate change can also aggravate the situation.”