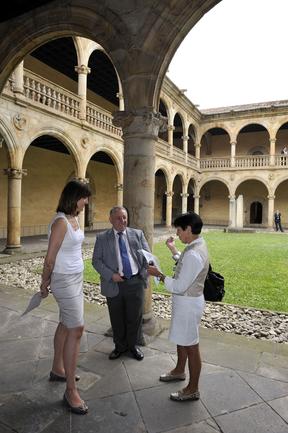 With the deployment of the New Law Office, courts will be provided with advanced computer systems and will be less dependent on paper.

Today, the Minister of Justice and Public Administration of the Basque Government, Idoia Mendia, and the President of the Supreme Court of Costa Rica, Luis Paulino Mora, signed a framework agreement of interinstitutional collaboration between the Judiciary of the Central American Republic and the Autonomous Government. The agreement, signed at the International Institute of Legal Sociology in Oñati, promotes the exchange of information relating to judicial management and its aim is to strengthen and improve the quality of management of the Justice Administration.

Both parties undertake to e-mail all the publications and projects they undertake in matters dealing with judicial management for their mutual information and dissemination, if appropriate, among magistrates, civil servants and the employees of their respective Justice Administrations.

The new agreement, which will have a duration of two years, strengthens the ties that exist in judicial matters between Costa Rica and the Basque Country, three months after the Basque Government joined the International Quality Management and Research Network for Justice (RIGICA) set up in Costa Rica.

In this way, the Basque Country joined a strategic alliance that aims to collaborate and exchange experiences in the preparation and application of methods to introduce continuous improvements in the quality of the Justice Administration. The Justice Ministry of France, Finland, the Supreme Courts of Argentina, Colombia, Costa Rica, Panama and El Salvador, and the universities of Antioquia (Colombia) and Buenos Aires (Argentina) also form part of the network.

The signature ceremony took place during the closing event of the first Seminars of the New Law and Tax Office, organised by the Law and Tax Office of the Basque Government, which depends on the Justice and Public Administration Department.

During the closing ceremony, Mendia pointed out that the setting up of the New Law Office is the most important challenge faced by the Ministry during this legislature.

Likewise, she added that it involves the definitive overall modernisation process of the justice system in Spain and declared that the Basque Government will dedicate a large amount of its financial resources to setting up the Office as it will play a vital role in improving the public justice service.

The Minister pointed out that with the deployment of the New Law Office, courts will be provided with advanced computer systems and will be less dependent on paper.

Finally, she thanked legal staff for their work as, thanks to them, the justice administration of the Basque Country is a reference model.

Seminars of the New Law and Tax Office

The meeting was held yesterday and today at the International Legal Sociology Institute of Oñati, with the participation of several experts in this field.
Among other matters, an analysis was made of the new law office from the viewpoint of the public administrations, the role of the judicial secretariat and that of the rest of the human resources that will have to adapt to the new distribution of tasks.

At this time, the Deputy Ministry of Justice is hard at work on the implementation of a new law office in the different legal parties of the Basque Country. To do this, it has been necessary to carry out legal reforms as well as actions taken in the areas of personnel, Basque language, computer systems, construction work and installations and material resources.

Idoia Mendia, Minister of Justice and Public Administration, closed the seminars in which Luis Paulino Mora, President of the Supreme Court of Costa Rica, Jose de la Mata, Director General of Modernisation of the Justice Ministry, and Jose Luis Bueren, in representation of the Public Prosecutor's Office of the State, also took part.