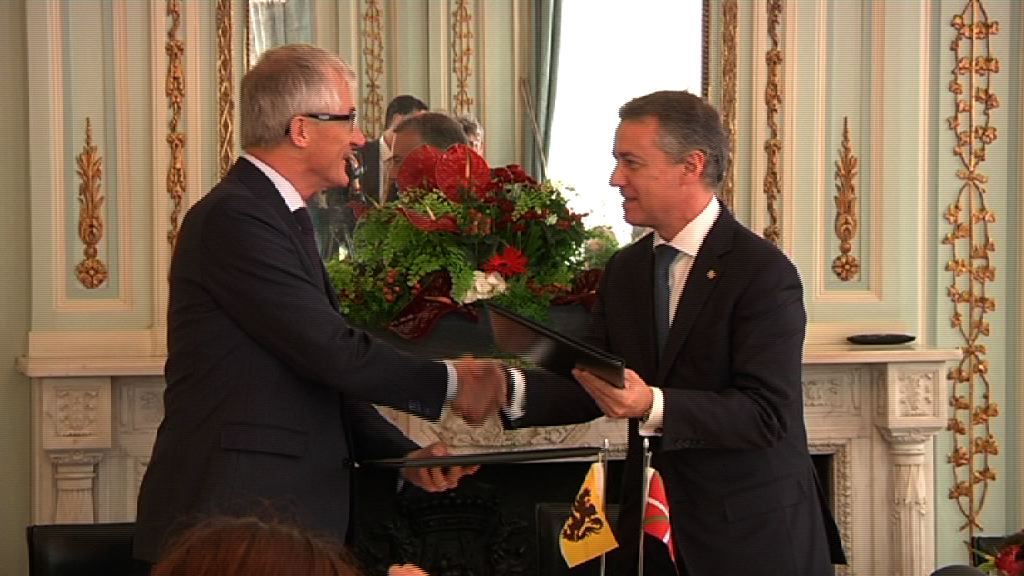 (*) This subtitling service is generated in an automated way with a software version under test. Sorry for any errors. 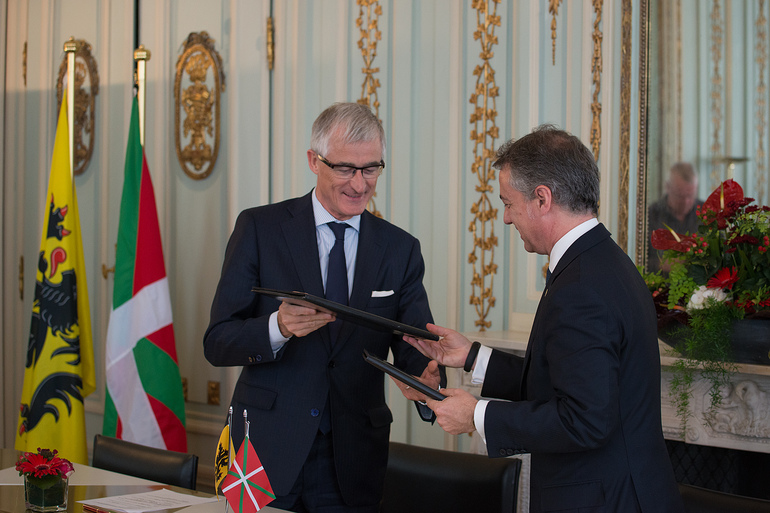 Lehendakari Iñigo Urkullu, the Basque Premier, and Geert Bourgeois, the Minister-President of Flanders, have signed a Memorandum of Understanding in Brussels this morning, aimed at forging and strengthening the relations that have traditionally existed between the Basque Country and Flanders.  During his visit, Iñigo Urkullu has met with the upper echelons of Flemish institutions and visited a leading research centre. The Lehendakari is accompanied on this occasion by the Secretary General for External Action, Marian Elorza, the European Affairs Director, Mikel Antón, and the Basque Country Delegate to the European Union, Marta Marin.

The Lehendakari’s programme started in the city of Leuven with the early-morning visit, along with the Flemish Secretary General for External Affairs, Koen Verlaeckt, to the Interuniversity Microelectronics Centre-IMEC, the world leader in nano-electronic research. After the visit, Urkullu met with the centre’s managers.

The Lehendakari and the rest of the Basque delegation then travelled to Brussels, home to the Flemish institutions, to meet with the Speaker of the Flemish Parliament, Jan Peumans. He later also met with the Minister-President of the Flemish Government, Geert Bourgeois, with whom he signed a Memorandum of Understanding entered into between the governments of the Basque Country and Flanders.  Its aim is to explore new forms of cooperation in areas such as innovation, vocational training and the job market, the environment, health or culture, and share experiences in the area of peace, coexistence and human rights.

During the signing ceremony and the subsequent joint appearance, the Lehendakari stressed that “with this memorandum, Flanders and the Basque Country gain standing as global players with their own voice and presence on the world stage. They have both adopted internationalisation, as a lever for economic recovery, by means of initiatives to attract economic investment, strengthen industry and drive trade and tourism-

According to Urkullu, this economic goal is particularly important after it was confirmed last week that the GDP had grown by 2.2% in the first quarter of the year. The Lehendakari went on to stress that he expected this to be followed by good news regarding employment, with the unemployment rate being cut by over 5,000 people.

Flanders is identified as a priority country. With a per capita income of 33,973 euros, its standing in the Belgium Federation has recently grown significantly and its economy is noted for its long industrial tradition and its cutting-edge position in innovation, where it invests 2.42% of its GDP in R&D.

The country has also unfolding a far-reaching external action based on its jurisdiction over developing international relations and it is even empowered to sign international treaties. At European level, the Flemish government advocates for a European Union built on the principles of subsidiarity and respectful of cultural diversity, which are principles that it shares with the Basque Government.