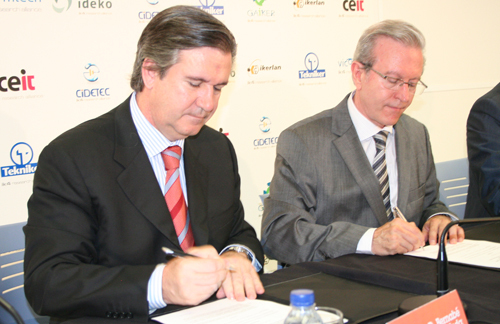 The agreement favours a stable collaboration framework and allows the Administration to take part in IK4's governing body, following the integration of its four centres

The Basque Government considers the Alliance a reference Technology Agent within the Basque Science, Technology and Innovation Network.

The Minister of Industry, Innovation, Commerce and Tourism, Bernabe Unda, has signed an agreement with the President of IK4 Research Alliance, Rafael Barrenechea, to foster innovation and technological development in the Basque Country. The agreement includes a stable framework of collaboration between both parties, including two new important features. On the one hand, the Administration will be able to take part in decision-making processes in IK4. On the other hand, the Basque Government will now consider the Alliance a reference Technology Agent within the Basque Science, Technology and Innovation Network. This agreement has been reached following the completion of an integration process in a new system of common management of the seven centres that make up IK4 (CEIT, Cidetec, Gaiker, Ideko, Ikerlan, Tekniker and Vicomtech. LORTEK will join the Alliance before the end of 2010.

During the signing ceremony, the minister pointed out that he is extremely satisfied with the joint work of the Basque Government and IK4 and thanked the Alliance for its response to the idea of the Government.

Likewise, Unda emphasised the fact that the Government has fostered a reduction in infrastructure costs and more investments in R&D projects and will continue to do so in the future.

Through this agreement the Basque Government recognises that in recent years the technology centres that make up the IK4 Research Alliance have made an effort to implement and develop its infrastructures with the aim of obtaining, generating and transferring technology to the business fabric of the Basque Country.

The agreement also recognises the contribution of IK4 to the industrial development of the Basque Country by helping Basque companies to meet the competitive demands of a globalised economy through applied research, technological development and innovation.The aim of the agreement is to advance towards a stable framework which will allow the planning of human resources, technical means and research projects in the mid term, in an innovation and excellence system that guarantees sufficient and adequate financing of research work.

The agreement represents the recognition of the "maturity" reached by IK4 and its role as "strategic ally of the Basque business sector". In this sense, both the Government and the technological Alliance will demand that the other orientates its activities and achieves specific results.

Moreover, the agreement involves a modification of the articles of association of the Alliance whereby the Department of Industry, Innovation, Commerce and Tourism will participate in its governing body. Specifically, the agreement includes the establishment of a model of corporate management that maintains the private nature of IK4, although it allows the public administration to take part in the design and development of the new organisation. The institutional representation of the governing body of the Alliance will be at least 25%, of which the Basque Government will have the absolute majority.

Furthermore, IK4 will submit the most relevant decisions of its organisation, such as the appointment of its directors or any modifications in its articles of association, to the Department of Industry, Innovation, Commerce and Tourism for its ratification.

For its part, the Department considers IK4 a reference Technological Agent for the development of its R&D&I policy and strategy. Likewise, the Government will promote a balanced private-public financing model, following the European financing models of technological corporations. To do this, it will apply support programmes that will help IK4 to develop its technological capabilities in accordance with the results obtained. The aim of this model framework is to attain a basic, stable financing of 25% of the consolidated R&D&I of the IK4 Alliance.

The agreement comes into effect today and will last until the end of the Government's Science, Technology and Innovation Plan.

The Technology Alliance IK4, consisting at this time of six Basque technology centres (CEIT, CIDETEC, GAIKER, IDEKO, IKERLAN, TEKNIKER and VICOMTECH and with LORTEK currently in the process of joining), recorded an overall turnover of more than 80 M€ in R&D&I in 2009. Today, IK4 employs more than 1250 professionals and develops activities in eight scientific-technological units: Biotechnology and Biomaterials, Micro and Nanotechnology, Environment and Recycling, Energy, Industrial Management and Production, Mechatronics, Materials and Processes and Information and Communications Technologies.

This specialisation allows the Alliance to position itself as a technological partner of companies in order to undertake all kinds of projects in a multitude of application sectors. For this reason, IK4 is also a reference model due to its participation in research projects promoted by the European, Spanish and Basque administrations.