The Basque Government seeks to improve the economic relationship with Sweden 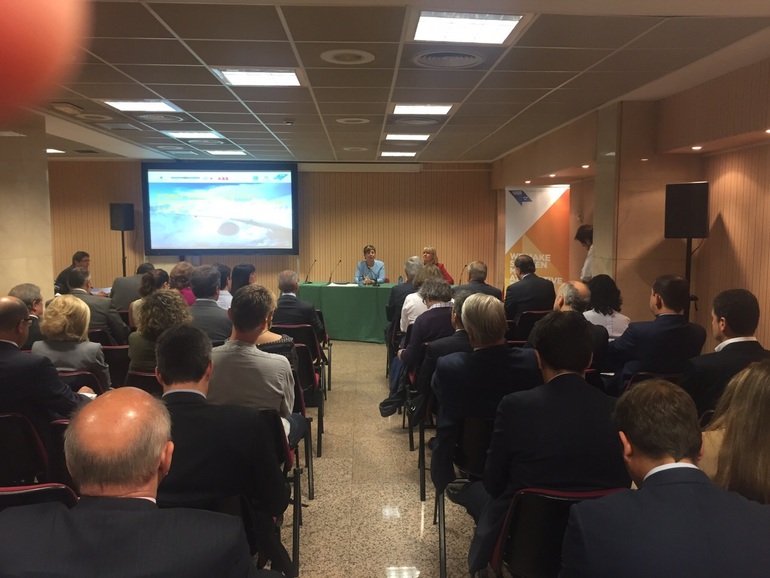 The Minister for Economic Development and Competitiveness, Arantza Tapia, advocated for increasing the economic relations between the Basque Country and Sweden.  She went on to stress that it is a benchmark model in innovation, that shows “that manufacturing can take place in our own country and can be competitive and create employment, by using technology, being committed to innovation, and producing products and services with high value added”. The Minister spoke during the opening session of the “Sweden-Basque Forum.  Innovating for Internationalisation:  Smart Industry”, held in Bilbao this Monday. The Scandinavian country’s Ambassador to Spain, Cecilia Julin, went on to corroborate Arantza Tapia's message. “I believe that we can establish that cooperation”.

The event, whose organisers included the SPRI Group (he Basque business development agency answering to the Basque Government’s Ministry for Economic Development and Competitiveness), was an opportunity to reflect on the internationalisation-innovation binomial applied to the industrial sector and based on the experience and accounts of Basque and Swedish companies.

The Minister pointed out that Sweden is the country of the European Union that most invests in R&D, to which it allocates “3.4% of the GDP, three times more than the Spanish State. “It is a clear benchmark model for us,” she stressed. “It is a country with which we share the commitment to industry. The conviction that we can manufacture in our own country and can be competitive and create employment. By using technology, being committed to innovation, and producing products and services with high value added”.

She pointed out that the Basque Country can offer the Swedes that “we are a dependable country, well prepared with competitive SMEs", to which she added the commitment to industry - "which has been proven to be the channel" for economic growth - and that "for decades we have taken technology and innovation very seriously".

Ambassadress Cecilia Julin outlined the growth model of her country.  “I do not know if there is Swedish innovation, but there has been a model that has been successful. We have a long track record in innovation from the spanner designed in 1891 to digital platforms such as Skype and Spotify”.

Carlos Marcos, Managing Director of the multinational ABB in Spain, also spoke at the forum and stressed that the Scandinavian country and the Basque Country “have in common the importance that they give to innovation”. He stressed that the weight of industry in the Basque GDP is 21% with plans in place for it to reach 25% in 2020 and it stands at 26% in Sweden.

The ABB Director (one of the largest business groups in Sweden employing 9,000 workers, 550 of whom are at its two plants in the Basque Country) expressed his firm belief in “the fourth industrial revolution as change comes from the customer.  It has never been so easy to be interlinked”. He foresaw that the industries of the future are going to be based on the so-called Internet of things, people and services. “We are going to see smart devices for decision taking on machines".

Tomás González, Idom Director, a company which has already taken part in two tramway projects in Gothenburg and Lund, and is now working on a stretch of the high speed train, stressed the transparency of the public tendering processes in Sweden.  He also pointed out that there are 20,000 public calls to tender this year. González warned that a high level of professionalism was required to break into the Swedish market. “You cannot be second rate.  I would encourage you to approach the Sweden market with some seriousness and if you are a benchmark, it is a great market. Otherwise, you would probably be wasting your time”.

Aitor Cobanera, the SPRI Group’s Technology and Innovation Director, explained the work of the Basque Government, which “has implemented an active industrial policy since the 1980s" and he recalled how the spending in R&D stood at "0.001% of the GDP" 35 years ago and now stands at 2.05%. “It began with the setting up of technology centres, a policy providing significant economic support for R&D projects and since mid 2000, the diversification into sectors such as bio- and nano-technology". Cobanera stressed that Basque technology parks are home to 400 companies with 14,000 workers, where “employment has even grown during the economic crisis, up 12%". The task, he explained, is now focused on developing the so-called smart specialisation, the directives of the European Union for each zone to focus on its strongest areas. In the case of the Basque Country, it has opted for advanced manufacturing, energy and biosciences.

Finally, Malin Svensson, the manger of the Swedish trade office for Spain and Portugal, confirmed that Sweden "was a late arrival to the industrial revolution and the way to be competitive was to be innovative" and that internationalisation has been behind its success. “Exports account for 50% of the GDP”. Svensson revealed that the targets are for Sweden to be the leader in the Internet of things by 2025 and in the area of advanced products by 2030.  This strategy involves developing six areas: “sustainable production, flexible production processes, developing simulation and virtual product, coordination between employees and robots for great productivity, service-based products and identifying integrated product processes”.