The Lehendakari points out that the current style of political leadership entails “Politics 2.0” and the “obligation” to guarantee public participation 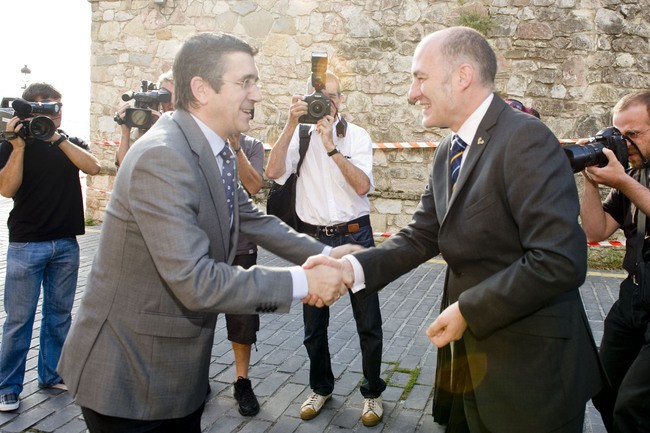 Lopez praised José Antonio Aguirre and Indalecio Prieto at a Basque University summer course held to coincide with the 50th anniversary of the death of the first Lehendakari.

"Strong leadership is no longer that of a person who walks ten paces in front of the rest, but that of a person who knows how to share and make leadership a collective matter, open to participation, to criticism and the proposals of his co-citizens". With these words, the Lehendakari, Patxi Lopez, defined the characteristics of political leadership at this moment in time, and went on to point out that institutions are "obliged" to guarantee public participation in order to improve "the quality of our democracy". According to Lopez, "Politics 2.0, in which a political leader sets out his policies and exposes himself to the control, criticism and contributions of any member of the public, is the way forward for politics" and a major challenge for the political classes. The Lehendakari made these declarations during the inauguration of the summer course Who makes history? Leadership in 20th century politics, held this morning at the Palacio Miramar in Donostia, to analyse the figure of the first Lehendakari, Jose Antonio Agirre.

The Lehendakari, Patxi Lopez, praised the figure of the first Lehendakari of the Basque Government, Jose Antonio Agirre, who he defined as "an essential figure" in order to understand the recent history of the Basque Country, as his government was "the first serious attempt to highlight the relevance of different standpoints in an open, plural and diverse state". Together with Indalecio Prieto and the other members of the first Basque government, they are the "founding fathers of the modern politics of the Basque Country".

The Lehendakari commended the fact that two politicians with different sensibilities, nationalist and socialist, "found a formula to collaborate in the construction of their country" and that both the "Statutes of 1936 and the Gernika Statutes" came into being with the same spirit. "It is for that reason that since the very creation of the Basque Country as a political entity, agreements between Basques of different persuasions have been an essential component of our political life and have allowed us to live the best moments of our history. This spirit of collaboration has became one of the signs of identity on which we have built our country and is still of fundamental importance in order to continue doing so", he emphasised.

These reflections formed part of the speech offered by the Lehendakari this morning at the Palacio Miramar in Donostia at the inaugural ceremony of the Basque University's summer courses "Who makes history? Leadership in 20th century politics". Iñaki Goirizelaia, Vice Chancellor of the Basque University and the President of the Sabino Arana Foundation, Juan María Atutxa also took the floor to analyse the figure of Jose Antonio Agirre, on the occasion of the 50th anniversary of the death of the first Lehendakari.

In his talk on the new forms of leadership, the Lehendakari drew attention to the differences between today's politics and the one that existed at the time of Agirre and Prieto. They were "individuals with very strong personalities and leadership qualities who gained the unquestionable support and loyalty of the people in their own social groups".

"Politics is no longer the wall on which we politicians hang our threatening edicts of compulsory compliance, nor the wall that blocks the desires of the public", he pointed out. The public "has ceased to be the choir that accompanies the sole leader" as they want to "play a part in their own future" and "the obligation of institutions is to generate efficient channels to make this participation possible". "'Politics 2.0', in which any political leader sets out his policies and exposes himself to the control, criticism and contribution of any member of the public, is the way forward for politics", he added.
Seminar on Central Europe

Following the inauguration ceremony, the Lehendakari took part in the 22nd Seminar on Central Europe: "Democratic frustrations", organised by the European Journalists Association. Lopez, who conversed informally with the ex-prime minister of Romania, Petre Roman, and the ex-president of Albania, Rexhep Meidani, highlighted the fact that according to the findings of the latest public opinion survey, only 2% of the population were concerned about the terrorism of ETA. This fact provides evidence of the "normal situation" of Basque citizens, more concerned about matters like unemployment, housing and the economic crisis than about "the interests of some political leaders".

In this sense, Lopez repeated that the most important thing in order to build a country is "to do it with everyone's collaboration, or not to do it at all", and that the government is actively seeking agreements between people of different political persuasions because "this forms part of the idiosyncratic nature of the Basque Country". "What is certain is that no ideological position can secure 100% of its demands as this would marginalise and exclude almost half of the members of society from their own country", he declared. He recognised that "we are never going to secure all of our targets", but on the other hand, "no one is going to be left to one side".